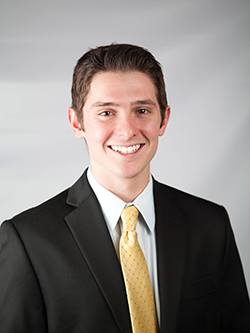 Max Darrow, a senior broadcast and digital journalism major in the Newhouse School, is the recipient of the 2015 Pete Wilson Scholarship. The scholarship, which is given by the Radio Television Digital News Association (RTDNA), was established in 2007 to honor the late Pete Wilson, a San Francisco television and radio journalist. The scholarship is granted to an undergraduate or graduate journalism student from the San Francisco Bay area or attending a college or university in the Bay Area who shares Wilson’s commitment to ethical, responsible journalism.

“I am extremely honored to be this year’s recipient of the Pete Wilson Scholarship,” says Darrow. “As an aspiring storyteller, this further fuels my passion for journalism. I hope that my journey will bring honor to Pete’s name.”

A native of Menlo Park, Calif., Darrow is a news reporter and anchor at Syracuse University’s CitrusTV and has held internships at KPIX-TV in San Francisco, WCAU-TV in Philadelphia and KION-TV in Salinas, Calif.

Associate professor Suzanne Lysak, who taught Darrow in the Critical Perspectives on News course, says, “I know he has a solid grasp of the responsibility of journalists to serve their communities, and also the need for professional journalists to insist on strong ethical standards in this era of digital and social media.”