A couple’s legacy will have a lasting impact on future generations of Syracuse University students. 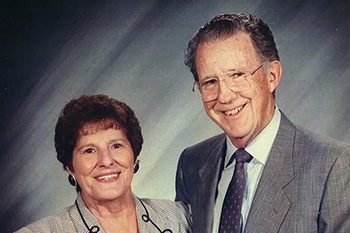 The estate of Richard ’52 and Eleanor Johnson has donated $2.4 million to the University to establish a scholarship fund. The Richard T. Johnson and Eleanor H. Johnson Memorial Scholarship Fund will assist students with financial need in any of the University’s schools or colleges.

Dick Johnson passed in 2007 and Eleanor Johnson died earlier this year, but their lives were connected to the University for many years.

Richard Johnson attended Syracuse University on the G.I. Bill. He served in the U.S. Navy as a gunner on a destroyer ship in the European theater during World War II. He graduated from the School of Management in 1952. After graduation, Richard, who married Eleanor in 1949, was recruited to work for a small meat company, Stein Associates, in Sandusky, Ohio. His task was to design a machine that could bread meat, fish and poultry products, and he holds five patents in his name. He eventually became the president of the company, working his way up and helping build the company.

Frequent visitors to campus and enthusiastic Syracuse sports fans, the Johnsons provided support to the University in a number of ways, including for the School of Management, the construction of the Hildegarde and J. Myer Schine Student Center and the Our Time Has Come Scholarship Fund. 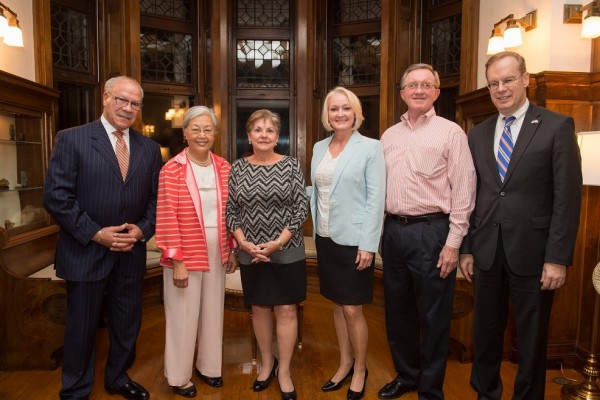 An event was held to honor the Johnsons’ support and the establishment of the scholarship fund. From left are Larry Martin, Dr. Ruth Chen, June Copper, Carolyn Copper, Rob Manor (Carolyn’s husband) and Chancellor Kent Syverud.

“Dick and Eleanor were devoted to the University, and it shows in many places around campus. Their name is on the donor wall at the Schine Student Center and in the atrium at the Whitman School of Management, and they were generous donors to the Our Time Has Come Scholarship campaign,” Chancellor Kent Syverud says. “And their ultimate gift has now created the Richard T. Johnson and Eleanor H. Johnson Memorial Scholarship Fund—a fund that will provide support for needy students at Syracuse University for generations to come.”

The Johnsons’ support and the establishment of the scholarship fund was celebrated at an event at the Chancellor’s House. Those gathered heard remarks from Chancellor Syverud and Larry Martin, vice president for program development. Several members of the Johnsons’ family, including Eleanor’s daughter, June Copper, and her granddaughter Carolyn Copper G’90, G’93, also attended the event. Carolyn Copper gave remarks on behalf of the Johnson family.

“Richard was a man of great strength and great determination. They were both wonderful people, a pleasure to be around, and I was fortunate to have known them,” says Larry Martin, vice president for program development. “The scholarship fund they are leaving is a perfect legacy of who they were—so many students are going to get an education because of Richard and Eleanor’s generosity for the University they loved.”