It all came down to just seven minutes.

Two hours of interviews, hours upon hours of pre- and post-production—including intricate theatrical staging, lighting and a professional puppeteer—and at least four months of editing. 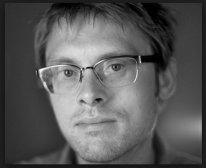 Then a green light from legendary documentary filmmaker Ken Burns and from the film’s subject, acclaimed author and professor George Saunders.

Finally, “George Saunders: On Story” by filmmaker and Newhouse graduate Tom Mason ’01, and his company Redglass Pictures, which he founded with fellow filmmaker Sarah Klein, was ready. After more than a year in the making, the captivating, seven-minute film was published this week on The Atlantic.com. The film is also available on PBS.com, since Burns is the series’ executive producer. He was also “On Story’s” first subject; Saunders is the second.

See the Saunders film on The Atlantic here.

In the film, Saunders, whom Mason describes as a “storytelling Jedi,” talks about his writing process. But just how interesting could an author, even one as accomplished and lauded as Saunders, be in a seven-minute taped interview?

“Watching him type was just not going to cut it.”

So Mason and Klein sized up two hours worth of interviews with Saunders—conducted last fall in the Joyce Hergenhan Auditorium at the Newhouse School—and had to figure out how to make it more than just a guy talking to the camera.

Much of their post-interview production time was spent developing ways to creatively illustrate Saunders’ words. They shot the interview on green screen to later substitute any background and Saunders gave them plenty of material to work with.

In a first for Redglass, they hired puppeteer Deb Hertzberg, who spent “days with an X-acto knife” cutting out paper letters to illustrate a sentence that Saunders explains in the interview, as well as the silhouette of a man hunched over a clicking typewriter. The film features several tattooed and colorful paper puppets, a mysteriously lit black box and a series of silky, smoky backdrops as Saunders describes his creative process.

“The puppets were a way we could visualize what he was saying and be whimsical and dreamlike and not too literal, which is kind of in keeping with his tone,” Mason says. “He doesn’t take himself or his writing too seriously. We wanted the piece to feel the same way.”

And Saunders, whom Mason met in 1999 while shooting a portrait of the writer for The Daily Orange, was pleased with the end result. Saunders emailed Mason after getting a preview of the film about a month ago.

“(He wrote) ‘That was fantastic,’ and in all caps, ‘thank you,’ ” Mason says, “which was just about the best response you could hear.”

Saunders wrote in an email Wednesday: “I think Tom is a wonderful and innovative filmmaker. The film somehow exactly matched (and enhanced) the spirit of what I was trying to say—I felt, throughout, that I was in the hands of a real master.”

Redglass Pictures, which specializes in short films and installation work, was not paid for the project—the company has produced two “On Story” short films, essentially for fun. The series’ mission—interviewing storytellers about their process—is something both Mason and Klein are passionate about, he says. The exposure the film will receive, through The Atlantic, PBS, the company’s website and social media, elevates the company’s credibility, Mason says. Burns’ support and involvement add some serious weight in the industry as well; both are a trade-off to doing all that work for free.

Redglass worked with Antfood, a creative audio studio that produced an entirely new soundtrack with live instruments for the film. And the Redglass website features additional content from the Saunders interview—no surprise since the unscripted interview is more than 120 minutes long, Mason says.

“We make shorts, we don’t make TV shows, which is really liberating,” says Mason, who lives in New Jersey with his wife and two young sons. “We can just not worry about a number and just make (the film) what it wants to be. We’re pretty critical about when the energy drops in it and we cut it down and cut it down. We got to the point where it was finally tight and every word was