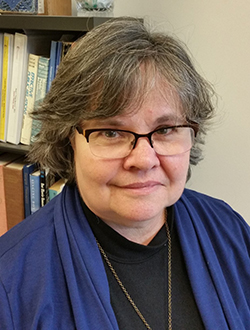 Librarian Janet Pease has been appointed head of collections in Syracuse University Libraries, a position she has held in an interim capacity for more than two years. Her prior positions include unit manager within the Department of Research and Scholarship at the libraries and head of the Science and Technology Library. She began her career at the University in the High Energy Theory Group in the Physics Department; her duties there included managing the preprint library.

Scott Warren, associate dean for research and scholarship, notes that Pease’s wealth of experience made her the clear choice. “I’m very pleased that Janet will continue the key role she has played recently, ensuring the libraries meet the needs of our campus community. The widespread trust and respect she enjoys are strong evidence of her effectiveness at navigating the rapidly changing world of academic librarianship.”

Pease holds a master of library science from the School of Information Studies and bachelor of arts in both anthropology and history from Syracuse University. She can be reached at jlpease@syr.edu or 443-9768.