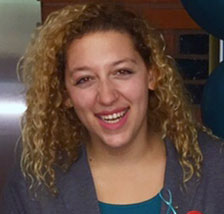 Because of her position as one of 17 students on the national “It’s On Us” student advisory committee, Samantha Skaller of Brewster, New York, introduced U.S. Vice President Joseph Biden Jr. at the organization’s recent event held in Goldstein Auditorium. She is active in the campaign against campus sexual assault, and is a double major in string performance (viola) in the College of Visual and Performing Arts and music history in the College of Arts and Sciences.

How did you end up coming to the University? What do you like about Syracuse?

I met the director of the SU Marching band at a summer music camp, and he was able to show me a lot about SU’s music program. When I came to audition for SU I fell in love with the campus. I like the music school community here at SU. It is a tight-knit community that is very welcoming. I have enjoyed the many opportunities to attend various concerts in Crouse. But the best part about my college experience so far has been the people I have met on this campus. Hearing so many different perspectives, learning about different cultures and expanding upon our ideas about changing our community has been such a big part of my college career so far.

How did you get involved in the “It’s On Us” campaign and the issue of campus sexual assault in general? 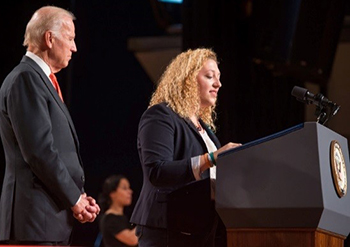 Skaller introduces U.S. Vice President Joseph Biden during the “It’s On Us” event held in Goldstein Auditorium in November.

I am very passionate about changing my community. I am a three-time sexual assault and rape survivor, and I decided to take those negative experiences and try to help others who have gone through something similar. After seeing the flaws in the way campuses treat sexual assault, I decided it was time to take action. I applied to be a member of the national “It’s On Us” Student Advisory Committee through Generation Progress. The Student Advisory Committee consists of 17 extremely passionate students who are all looking to change the way campuses think and act about sexual assault. It has been such an honor being a part of the “It’s On Us” campaign.

What other things are you involved in on campus?

I’m the pit manager for First Year Players and a peer educator for the Office of Health Promotions. For my sorority, Sigma Alpha Iota, I’m the social and promotions chair. In the area of sexual assault prevention, I’m a committee member for Take Back the Night. I’m also the assistant principal viola player in the University’s Symphony Orchestra.

What are your plans after you graduate?

I plan to attend graduate school for musicology with an emphasis on women’s studies. I hope to be a music history professor at the collegiate level, teaching courses about women in all eras of music. I also plan to continue my activism about prevention of sexual assault on college campuses wherever I go in the future.