On Friday, Dec. 11, 25 Maxwell School graduate students in international relations, public administration and public diplomacy will hold the final session in a one-of-a-kind, short-term class titled “Food Security and Policy.” They will reflect on a Thanksgiving-break class trip to Rome, where they spent five days learning from experts in the field of hunger alleviation. The class, led by Catherine Bertini, professor of public administration and international affairs, included sessions with policy makers and implementers from three United Nations agencies that work to combat hunger on a global scale. 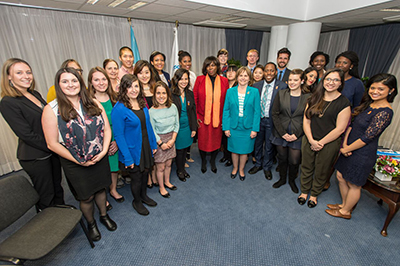 Professor Catherine Bertini (right of center, in teal) and Ertharin Cousin (center, with orange scarf), director of the UN World Food Programme, with members of Bertini’s “Food Security and Policy” class in Rome.

The course allowed students to meet and learn from experts at the World Food Program (WFP), the Food and Agriculture Organization (FAO) of the United Nations, and the International Fund for Agricultural Development (IFAD) on topics ranging from the logistics of food aid distribution to the role of gender and climate change in the forming of policies. Speakers such as Stefano Porretti, director of emergency preparedness and support response for the WFP; Adolfo Brizzi, director of IFAD’s Policy and Technical Advisory Division; and Anna Lartey, director of FAO’s Nutrition Division, were just a few of the experts who shared their experiences tackling food security in an ever-changing global context.

Bertini is the former executive director of the UN’s World Food Programme and recipient of the 2003 World Food Prize. She is also a distinguished fellow of the Chicago Council on Global Affairs Global Agriculture and Food Initiative. Throughout the week-long stay in Rome, Bertini acted as guide and mentor to the class.

“Professor Bertini is highly esteemed at the UN agencies in Rome,” says MPA/IR student Ana Monzon. “We owe the great honor of having been able to engage in dialogue with these leading practitioners to Professor Bertini and her inspiring legacy at the World Food Program.”

“I could not have predicted the level of sincerity and dedication that each speaker showed towards their work,” says MPA student Eric Horvath. “Whether talking about facility management, supply chains, promotional materials or nutrition for malnourished children, all of our speakers possessed a passion and expertise I have rarely seen in my life.”

The trip culminated in a personal visit by Ertharin Cousin, the current executive director of the WFP, whose message was one of hope. The group was able to discuss with Cousin the WFP’s new initiative, the Zero Hunger Challenge, which was launched in 2012 by UN Secretary General Ban-Ki Moon with the aim of achieving a hunger-free world by the year 2030.

Students in the class describe the week in Rome as an eye-opening experience. “For me, the biggest takeaway was how we can see so much tangible change that these organizations have made in the world,” notes MPA student Anna Swanson. “Numbers speak volumes, and due in large part to the work of these organizations the number of hungry people in the world has decreased from 1 billion to 795 million people over the course of five years.”