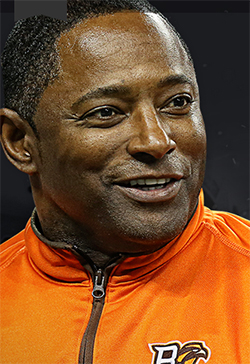 During his accomplished 30-year football coaching career, Dino Babers’ name has been synonymous with winning. Known for his teams’ offensive prowess, respected for his keen sense for recruiting and mentoring top-tier student-athletes, and lauded by many for his ability to turn around football programs, Babers will take the helm of Syracuse University football as the program’s 30th head coach.

Babers will be officially introduced as head football coach at a press conference on Monday, Dec. 7 at 10 a.m. in the Ferguson Football Auditorium in the George R. Iocolano and William C. Petty Football Wing in Manley Field House.

“It is a true honor to have been selected to lead Syracuse University football, a program steeped in rich tradition, excellence, and success, both on and off the field,” says Babers. “There were many coaching opportunities out there but none more attractive or exciting than this one. I’ve always admired Syracuse Football’s scrappy demeanor, grit, and winning mentality, but what attracted me to this position even more is the University’s intense focus on preparing its student-athletes for a lifetime of success. This is an incredible opportunity and one I am thrilled to have been offered.”

“We wanted a leader who had a proven track record and a strong commitment to student welfare,” says Mark Coyle, Syracuse’s director of athletics. “Dino’s background as a former student-athlete combined with his head coaching experience, and dynamic offensive mind make him a great fit for our program. We are committed to building a winning Syracuse Football program and today reinforces that commitment.”

“Syracuse University has hired the best person for this job,” says Chancellor Kent Syverud. “Dino’s success in previous head coaching roles is a testament to his character, his ability to motivate young student-athletes, and his can-do attitude. Under Dino’s leadership, we are going to build a competitive program in the ACC and continue to foster an environment where success in the classroom is equally as important as success on the field. On behalf of the Syracuse University community, I wish to extend a warm welcome to Dino, his wife Susan and their family.”

Prior to joining Bowling Green, Babers was head football coach at Eastern Illinois University (EIU), where he was named coach of the year in the Ohio Valley Conference (OVC) two years (2012 and 2013) in a row. During the 2012 season, Babers’ first season at EIU, he led the team to a first-place finish, after the team finished last place in 2011 under the previous coaching staff. That marked only the fourth time in OVC history a team went from last to first place in a single season. In 2013, under Babers’ leadership, EIU finished 12-2; earned a number two national ranking; appeared in the quarterfinals of the Football Championship Subdivision (FCS); and had the best offense in the FCS. At EIU, Babers mentored Jimmy Garoppolo, currently an NFL quarterback, who was named the 2013 Walter Payton Award winner, the FCS equivalent of the Heisman Trophy — given to the nation’s best player.

But, it’s Babers’ time at Baylor that has Syracuse football legend Floyd Little ’67 excited about the future of Syracuse Football.

“Dino’s intimate involvement shaping the Baylor offense and his proven ability to replicate its success at Bowling Green and EIU makes him an ideal person to step in as Syracuse Football’s next head coach,” says Little, who also serves as special assistant to the athletics director. “This is an exciting time to be a part of Syracuse Football and I am eager to see the great things that will be accomplished under Dino’s leadership.”