The Sport Management (SPM) Club, in collaboration with Steiner Sports, is holding an online auction of premium items now through Dec. 13. Just in time for the holidays, this online auction is part of the SPM Club’s 11th Annual Charity Sports Auction to benefit the Salvation Army. 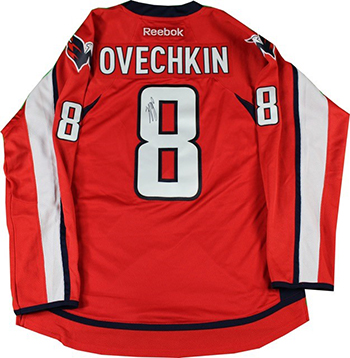 One of the available items is an Alex Ovechkin-signed jersey

The online auction offers a wide range of sports memorabilia, including a Madison Bumgarner autographed baseball, 2015 NBA All-Star autographed basketball, Alex Ovechkin-signed jersey, two tickets to the New York Knicks vs. Milwaukee Bucks game at the Madison Square Garden on Jan. 10, a baseball signed by Hank Aaron, a Tony Parker-autographed jersey, a puck signed by Jonathan Toews and a 2012 Indianapolis 500 plaque autographed by Dario Franchitti. Two tickets to UFC Fight Night (Johnson vs. Bader, Prudential Center, January 30) and four glass seats and parking to New Jersey Devils vs. Boston Bruins at the Prudential Center on Jan. 8 are available. Additional authentic autographed items include a 2015 New York Jets football, a 2011 Heisman Trophy finalists poster and a soccer ball, jersey package and goalie stick autographed by Carli Lloyd, Steve Nash and Martin Brodeur, respectively. Two tickets to the 2016 NCAA Men’s Final Four in Houston, including a four-night hotel stay, tickets to the semi-finals and National Championship games as well as the respective pre-game parties (airfare not included) are up for bid.

The online auction also features other items, including seven nights for up to two rooms (double occupancy) of villa-style suite accommodations at The Verandah Resort and Spa in Antigua and five nights’ accommodations (double occupancy for up to 3 rooms) at Los Establos Boutique Inn, Panama. For more information about the auction, visit http://sucharitysportsauction.com/ or contact the Department of Sport Management at 315-443-9816. Additional items will be added along the way.

The SU Sport Management Club is a student-run organization of the Department of Sport Management in Falk College. Since its founding in 2005, the club has raised over $272,000 for local charities.