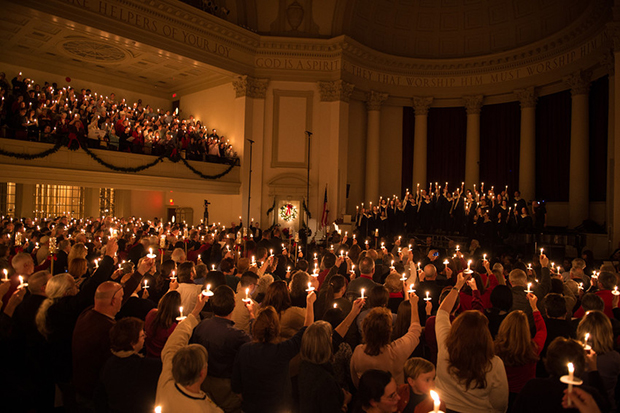 Concertgoers hold candles while they sing “Silent Night” at the end of last year’s “Holidays at Hendricks” concert.

Hundreds of musicians will converge on the University for “Holidays at Hendricks,” taking place Sunday, Dec. 6, at 7:30 p.m. in historic Hendricks Chapel.

A campus tradition for more than a decade, the concert is free and open to the public. For more information, call Hendricks Chapel at 315-443-2901, or click here.

The program includes the world premiere of Daniel Gawthrop’s “The Longest Night” for adult choirs and brass, commissioned by the Setnor School of Music in the College of Visual and Performing Arts, and made possible by a generous grant from the New York State Council on the Arts; the Northeastern premiere of Paul Carey’s “Christmas Bells” for brass, organ, percussion and handbells; and a special brass version of “T’was the Night Before Christmas,” narrated by Chancellor Kent Syverud.

Rounding out the evening is a variety of traditional and contemporary favorites, culminating with a candle-lighting ceremony and sing-along version of “Silent Night.”

“‘Holidays at Hendricks’ is a wonderful way for the Syracuse University community to come together and celebrate the season,” says Calvar, the event’s artistic director, as well as an assistant professor of conducting in the Setnor School. “We’re particularly honored to present some new music this year, along with some popular holiday chestnuts. There’s something for everyone.”

Spencer, the event’s producer, echoes these sentiments, saying that for audiences and performers alike, “Holidays at Hendricks” is an annual highlight. “Regardless of which side of the podium you’re on, the combined effect of brass, singers, percussion, organ and hand bells is mesmerizing,” says Spencer, who also serves as a Meredith Professor of Chemistry and the executive director of the Forensic and National Security Sciences Institute in the College of Arts and Sciences, which sponsors SUBE. “Plus, Hendricks Chapel, with its beautiful decorations and luxuriously warm sound, always strikes the right note with audiences.”

Although the chapel has played host to holiday concerts over the decades, it wasn’t until the early 2000s that SUBE joined forces with the Hendricks Chapel Choir—then led by Warren—to present the “Holidays at Hendricks” format that has become popular today.

Spencer and Calvar usually spend 18 months planning each program. “While we’re already working on next year’s concert, I must say that, collaborating with the chancellor, who’s an accomplished musician, will be hard to top,” Spencer adds.

Attendees are encouraged to bring a non-perishable food item to be donated to the Hendricks Chapel Food Pantry.

Through a unique collaboration between the University and WCNY, the 90-minute concert will be broadcast later this month by WCNY.

DVD copies of last year’s “Holidays at Hendricks” concert are available for sale at
the SU Bookstore.