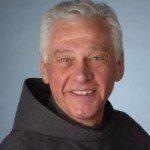 Father Linus DeSantis, the Catholic Chaplain at Syracuse University and the SUNY College of Environmental Science and Forestry, passed away Tuesday, Dec. 1.

A wake honoring Father DeSantis will be held Friday, Dec. 4, from 3 – 9 p.m. with a wake service at 7 p.m. at the Alibrandi Catholic Center, 110 Walnut Place.

A funeral service will be held Saturday, Dec. 5, at 11 a.m. at the Franciscan Church of Assumption, 812 N. Salina St. A bus will be available at 10 a.m. from the Alibrandi Catholic Center.

Father DeSantis, OFM Conv., had been the Roman Catholic chaplain at Hendricks Chapel since November 2007. Originally from Baltimore, Md., he was a Conventual Franciscan Friar who entered religious and priestly formation in 1961. He was ordained to the priesthood in 1971.

“Father Linus was a beloved chaplain whose commitment to students was apparent to anyone who met him,” says Interim Dean Hendricks Chapel Samuel P. Clemence. “For eight years he has served students, faculty, staff and the larger Syracuse community passionately, and I know his presence on our campus will be dearly missed.”