Scott Warren has been selected to participate in the 2016-2017 Association of Research Libraries (ARL) Leadership Fellows Program. Warren, associate dean for research and scholarship at Syracuse University Libraries, will join 27 other professionals in this executive leadership program that fosters the development of senior-level leaders in large research libraries and archives. 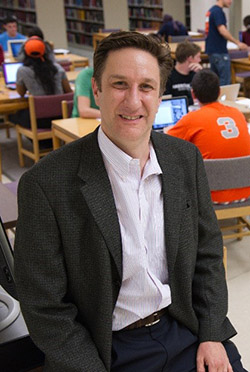 Warren expressed enthusiasm for the program, saying, “I am honored to represent Syracuse University Libraries in the 2016-17 ARL Leadership Fellows Program. Because many issues confronting 21st century research libraries will require institutional collaboration to solve, developing strong relationships with an outstanding group of librarians engaged in similar efforts nationwide is a wonderful opportunity. I particularly want to thank Dean Seaman, whose steadfast support has made my participation possible.”

During the course of the program, each fellow will construct a learning plan; engage in a customized, immersive experience to shadow a library director; participate in three weeklong institutes hosted by sponsoring ARL institutions; participate in online synchronous sessions; and attend semiannual association meetings.

This is the sixth offering of the program, designed by ARL staff in collaboration with the Leadership Fellows Advisory Group and the directors of the three sponsor libraries: University of Alberta, Colorado State University and Duke University. The program begins in January 2016 and runs through April 2017.

The 2016–2017 ARL Leadership Fellows applicant pool was highly competitive. The selection committee, composed of the directors of the sponsoring libraries, chose 28 fellows from multiple ARL and non-ARL institutions representing a broad array of backgrounds and experience.

“I’m delighted that Scott has been selected for this prestigious and high-profile leadership program, and I have no doubt that he will take full advantage of the learning opportunities and collaborations it will give him,” says Dean of Libraries David Seaman, who was himself an ARL Fellow in 2011-12.

Established in 1932, the ARL is a nonprofit organization of 124 research libraries at comprehensive, research institutions in the US and Canada that share similar research missions, aspirations, and achievements.