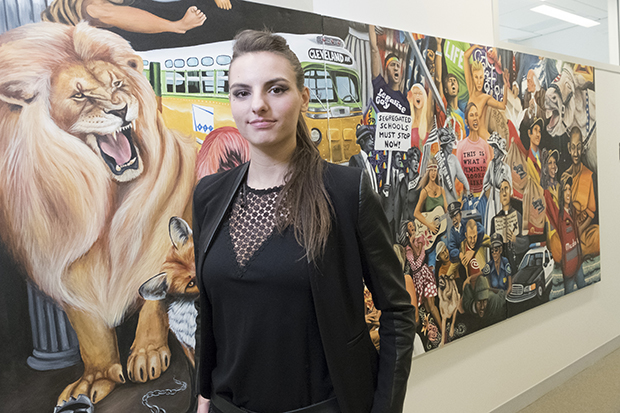 Morgan McKinney stands in front of one of her paintings comprising “The Pursuit of Justice,” which are hung in the College of Law’s Student Life Office.

The College of Law unveiled artwork by Morgan McKinney L’16 in the Student Life Office. The office now displays six 5’ by 4’ canvas paintings called “The Pursuit of Justice” by McKinney that depict scenes from American law and society.

“Morgan’s work is a vibrant expression of several aspects of the law, its history and how it intersects with society,” says Tomás Gonzalez, senior assistant dean of student life. “Her paintings further demonstrate the hidden talents of our students and how that those outlets help them through the rigors of law school in positive fashion.”

For her art, McKinney used acrylic paint on canvas. The six paintings can be arranged together in a 10’ by 12’ mural, although they will be displayed individually at the Office of Student Life. The scenes use characters, symbols and situations from legal history, prominent legal writings, landmark cases and events that have shaped law in the United States.

“I have always been an artist, just like my parents, and while at the College of Law have incorporated my legal studies into what I create,” said McKinney. “I felt that having the paintings in the Office of Student Life would help everyone feel more relaxed and productive and be a source of inspiration or contemplation as they study.” 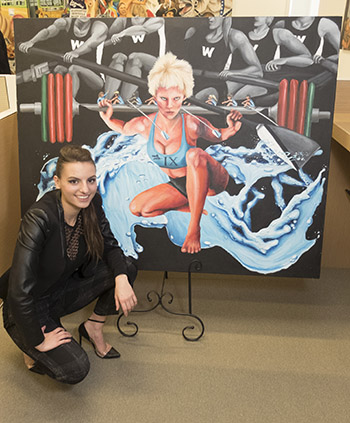 McKinney with her painting “Title IX.”

McKinney explains, “A recurring theme I have found throughout many of my classes is the public’s pursuit of justice and how different individuals and organizations fight to define and establish their own idea of what constitutes a just government system. In accordance with that theme, I chose to center the piece around a modern interpretation of the woman of justice.”

One of McKinney’s pieces, “Title IX,” is based on the 1976 Yale women’s crew team. Yale first opened its doors to women in 1969.  However, several years later the institution was still failing to provide equal funding to the male and female athletics programs.  After every practice, the female crew members had to sit on a cold bus and wait until the male crew members finished showering before they could be driven back to campus to finally wash up themselves.  After several of their complaints fell on the deaf ears of the administration, the women turned to the one weapon they had left—Title IX.  In an act of defiance, the 19 women walked into the athletic director’s office and stripped down to reveal the words “Title IX” written across their bare chests.