Marie-Claire Saindon, a collaborative vocalist, composer and resident of Montreal, Quebec, Canada, has been named the winner of the 2015 Gregg Smith National Choral Composition Contest in the College of Visual and Performing Arts’ Rose, Jules R. and Stanford S. Setnor School of Music. The award, which is named for renowned composer and choral conductor Gregg Smith, is given biennially to a young composer between the ages of 21 and 35 who has written and submitted a new musical composition for a Setnor School of Music choral ensemble. 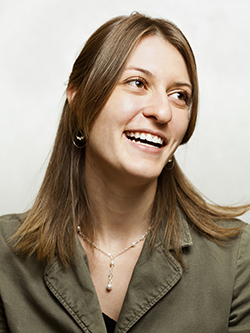 Saindon’s work “Day’s Voices: Dawning II” was selected by a committee of Setnor faculty from numerous entries submitted by composers throughout North America. In addition to the award, Saindon’s work will be premiered by the Syracuse University Women’s Choir at the 13th Annual Syracuse University Women’s Choir Invitational Festival under the artistic direction of Barbara M. Tagg on Saturday, April 16, at 2 p.m. in the Rose and Jules R. Setnor Auditorium, Crouse College.

“The Syracuse University Women’s Choir is pleased to bring attention to this talented and emerging young Canadian composer,” says Tagg. “We look forward to working with her to bring this beautiful new work to life.”

Saindon’s writing for women’s chorus has been informed by a lifetime of collaboration and creativity. After earning a bachelor’s degree in composition from McGill University, she studied composition with Ana Sokolovic and Pierre-Daniel Rheault at Université de Montréal, earning a master’s degree in composition in 2010. Her compositional output is vast and varied and has been performed throughout Canada. She has received commissions from Arkéa, Fíolütrôniq, Théâtre Filament, YOW Productions, Camerata Singers and Concerto Della Donna, an 18-voice women’s vocal ensemble in which she also performed from 2009-14. In 2013, her work “Øst for vinden” (2012) won first place in the SOCAN Young Composers National Awards in the Godfrey Ridout vocal category.

Saindon is currently working with Emmy Award-winning director Colby Gottert (“Voyage of the Vezo,” 2010), singing in the all-female contemporary/folk vocal ensemble ina, and composing for stage and film.

The Setnor School established the Gregg Smith National Choral Composition Contest and the Gregg Smith Graduate Choral Conducting Scholarship in 2008 with the support of an anonymous donor. Smith has had a more than 30-year relationship with Syracuse University, including the Women’s Choir and the Syracuse Children’s Chorus, which premiered and recorded numerous works by Smith under Tagg’s artistic leadership. Smith and the Gregg Smith Singers have collaborated with Tagg on operas, concerts and numerous premieres.