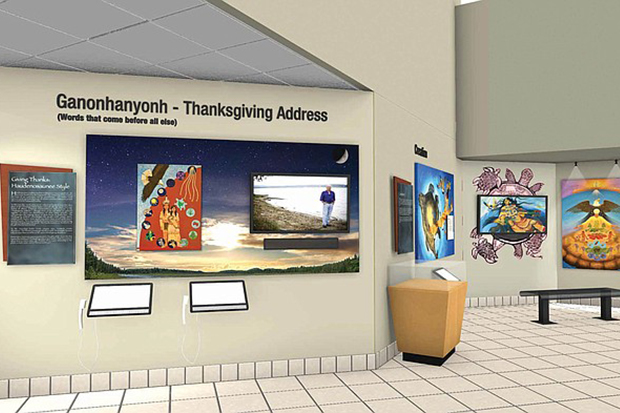 History will come alive this weekend, as the University helps celebrate the grand opening of Ska-nonh—The Great Law of Peace Center, along the ancient shores of Onondaga Lake in Liverpool, N.Y.

The two-day celebration includes a Gala Dinner Fundraiser on Friday, Nov. 20, from 6-9 p.m. and an Opening Day Festival on Saturday, Nov. 21, from 10 a.m. to 4 p.m., featuring tours, demonstrations and native food and crafts. Both events take place at the center (6680 Onondaga Lake Parkway, Liverpool), and are open to the public.

The fundraiser is $100 per person, and features special remarks by Gregg Tripoli, executive director of the Onondaga Historical Association (OHA); Philip Arnold, Ska-nonh’s founding director and associate professor of religion and Native American studies in the College of Arts and Sciences; and various dignitaries. For reservations, call Karen Cooney at the OHA at 315-428-1864, ext. 312.

Located on the former site of the 80-year-old Ste. Marie Among the Iroquois museum, Ska-nonh is managed by the OHA through a licensing agreement with Onondaga County. In addition to the Onondaga Nation, the center works closely with its academic partners: Syracuse, Le Moyne College, Onondaga Community College, Empire State College and SUNY-ESF. 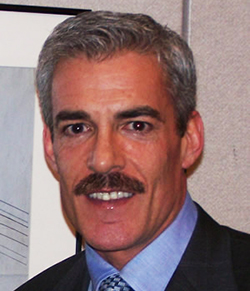 Tripoli, for one, is excited about the University’s role, seeing it as an opportunity to clarify the Haudenosaunee impact on the development of the U.S. government, women’s rights, agriculture, environmentalism and lacrosse. “The Ska-nonh Center honors that great history and its contributions to our American way of life,” he says. “For the first time anywhere, it does so through the oral history tradition of the Haudenosaunee, according to the perspective of the spiritual and political center of the Confederacy.”

Also known as “People of the Longhouse,” the Haudenosaunee Confederacy is made up of the Onondaga, Mohawk, Oneida, Cayuga, Seneca and Tuscarora nations. (“Iroquois” was the name given to the Haudenosaunee by French Jesuits.) According to legend, the Great Peacemaker, through his spokesman, Hiawatha, founded the confederacy more than a thousand years ago on the shores of Onondaga Lake. The Haudenosaunee were bound together by a series of narratives known as the Great Law of Peace, which provided social organization among the nations and later served as an inspiration for the U.S. Constitution.

By the 1680s, the Haudenosaunee reached their economic and political peak, boasting alliances with native peoples from New England to the Mississippi and from the St. Lawrence Valley to Virginia. A number of factors, including the Revolutionary War, all but decimated the confederacy.

“Prior to the arrival of missionaries and explorers, the Haudenosaunee were formidable,” says Arnold, whose expertise extends into the historical and religious landscapes of Central New York. “They negotiated treaties with other nations, managed extensive trade routes and formed strategic partnerships with the Dutch, French and English colonists, and with other indigenous peoples.”

Onondaga is one of only a few federally recognized indigenous nations still using pre-contact government. “They have one of the oldest forms of representative government in the world, still meeting in a Grand Council, roughly 10 miles south of Syracuse,” Arnold says. 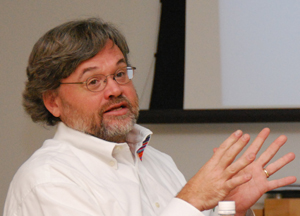 He points out that the Ska-nonh Center is not a museum in the traditional sense because it does not focus on collecting and sharing objects. Instead, its goal is to provide visitors—ideally, non-native ones who are “hypersensitive to negativities of the past”—with an engaging oral history via film and other multimedia formats.

Adds Tripoli: “Our exhibits will focus mainly on the role of storytelling in Haudenosaunee culture, the relationship between people and their environment and the effects of the Great Law of Peace.”