Acclaimed broadcast journalist Bob Dotson G’69, an alumnus of the Newhouse School, will return to campus Dec. 1 as a guest of the school’s broadcast and digital journalism department. He will take part in a retrospective Q&A at 5:30 p.m. in the Joyce Hergenhan Auditorium in Newhouse 3. 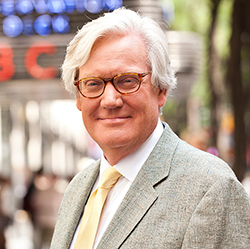 Dotson recently retired after 40 years with NBC News, 35 of them on the “Today” show, where he hosted the “American Story” series. During his career, he filed 4,000 stories for NBC News and traveled some 4 million miles.

He earned 120 national and international awards for producing and reporting, including six Edward R. Murrow Awards for Best Network News Writing (a record) and 12 more for reporting. He also received eight National Emmy Awards and 11 nominations. In addition, he was honored by the William Allen White and Robert F. Kennedy foundations and earned a CINE Grand Prize and Alfred I. duPont-Columbia University Awards.

He is the author of “In Pursuit of the American Dream”; “Make It Memorable: Writing and Packaging Visual News with Style” (the second edition was Amazon’s best-selling journalism book); and the New York Times Best Seller “American Story: A Lifetime Search for Ordinary People Doing Extraordinary Things.”

On Oct. 24, the 40th anniversary of the day he joined NBC, Dotson filed his last American Story and said goodbye to his viewers.

The event is free and open to the public. For more information, contact Keren Henderson at 315-443-3489 or khenders@syr.edu.