An internationally renowned human rights activist and member of the “Lost Boys of Sudan” is giving an author reading at the University. 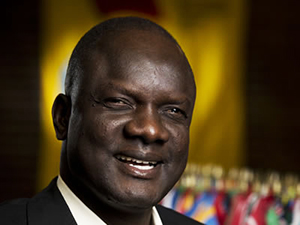 John Dau ’11 will headline the Writing Program’s Nonfiction Reading Series on Thursday, Nov. 19, at 3:30 p.m. in 207 Hall of Languages. He will read from his critically acclaimed memoir “God Grew Tired of Us” (National Geographic, 2007), also the subject of an award-winning documentary by the same name, and from his children’s book, “Lost Boy/Lost Girl: Escaping Civil War in Sudan” (National Geographic, 2010). The University Bookstore will be on hand to sell copies of both books.

The reading, which is free and open to the public, is sponsored by the Writing Program in the College of Arts and Sciences. For more information, call 315-443-1091.

“We’re honored to present a reading by John Dau, whose experience of surviving the second Sudanese civil war and then resettling in the United States is both courageous and inspiring,” says Eileen Schell, associate professor of writing and rhetoric. “His story is a reminder of not only the hardships of war and privation, but also the strength and resilience of the human spirit.”

In 1987, 13-year-old Dau fled his village in Sudan, narrowly escaping Arab troops who had been sent to exterminate black Christian men. He soon joined 27,000 other exiles, known as the “Lost Boys of Sudan,” and spent the next 14 years alternately crossing the sub-Sahara on foot and living in refugee camps. In addition to being pursued by soldiers, the boys  fended off wild animals and faced starvation, dehydration and disease on a daily basis.

“We chewed tall grasses, and ate mud to stay alive. I was barefoot and wearing no clothes; at night the desert was so cold. We thought about our parents all the time,” he says.

More than half of the “Lost Boys” died by the time Dau and others reached an Ethiopian refugee camp, from which they were forced to flee and return to Sudan, only to be subjected to twice-a-day bombing raids.

“When the bombardment became unbearable, we moved south,” says Dau, who eventually wound up in a refugee camp in Kenya. “There, at age 17, I started my formal education, writing letters and numbers with sticks in the dirt.”

The compelling story of how Dau relocated to Central New York, earned a bachelor’s degree in liberal studies from Syracuse, and worked to raise money and awareness for health and education projects in Sudan is traced in his memoir. Today, he is president of both the John Dau Foundation and the South Sudan Institute.

“John Dau is an influential part of many efforts to bring hope and peace to the people of South Sudan. He speaks out and advocates for human rights across the globe,” adds Schell, whose Honors course, “Reading and Writing War” (HNR 340), Dau will also visit to discuss the challenges that refugees face when fleeing war-torn nations.