James Gordon Williams, a creative musician and critical musicologist in the College of Arts and Sciences, will present a special concert titled “Outlaw Culture Music.”

Inspired by a series of essays by social activist Gloria Jean Watkins (whose nom de plume is bell hooks), the concert will take place on  Thursday, Nov. 19, at 6:30 p.m. in the Community Folk Art Center’s Black Box Theater (‪805 E. Genesee St.). The event is free and open to the public, and coincides with CFAC’s fall exhibition, “Resistance,” featuring works by Najee Dorsey. For more information about both events, visit CFAC at ‪http://communityfolkartcenter.org. 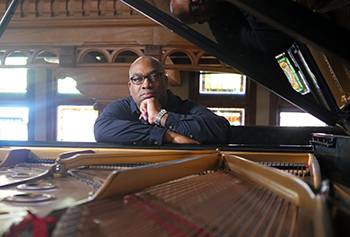 A pianist, composer and assistant professor of African American studies, Williams will be joined by New York guitarist Marvin J. Sewell; bassist and Syracuse native Ian Stewart; and drummer Joshua Dekaney, also an instructor in the College of Visual and Performing Arts’ Setnor School of Music.

“Outlaw Culture Music” is inspired by hooks’ “Outlaw Culture: Resisting Representations” (Routledge, 2006). The book’s mix of essays and personal dialogues sheds new light on racism at the intersection of sexism and popular media.

Williams says his program of original music is in conversation with hooks’ work and seeks to examine the “critical thinking process behind deconstructing representations of oppression, liberation and resistance.”

“An ‘outlaw’ usually refers to someone who has broken the law,” he says. “In this context, it alludes to someone whose life has not been valued the same way within the law. Historically, certain communities have been considered outside the concern of the law.”

Williams adds that Dorsey’s exhibition, which uses mixed media to explore the legacy of African American resistance and the oppression that has spawned it, provides the ideal backdrop for the concert.

“As an artist and scholar, I am hoping that the audience will gain a deeper understanding of how critical thought can be directly related to composition and improvised musical texts,” Williams says. “I believe people can be thrilled by musical sounds, and encouraged to think critically about what that sound represents.”

Williams joined the faculty in 2014. His research interests include practices of resistance in Afro-diasporic improvisation and composition, performance of racial identity through music technology, and the epistemologies of African American music.

A native of Los Angeles, Williams has worked with some of the biggest names in modern jazz, including drummers Charli Persip and Peter Erskine, saxophonists Greg Tardy and Greg Osby, and bassist Mark Dresser. His performances have taken him all over the world, including France, Italy, Switzerland and Malta.

“Music is always more fun and meaningful when it’s rooted in powerful ideas that lift people up, instead of tearing them down,” he says. “Performing at CFAC is to perform in a very special place with allies who have been doing this kind of critical work in various formations for decades. I am proud to be a part of its history.”

Attendees are encouraged to share their voice by using #OutlawCultureMusic on Twitter, during and after the concert.