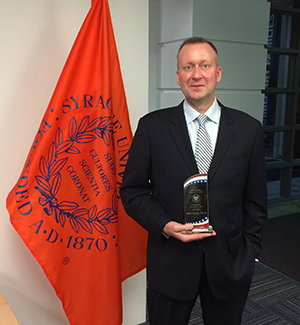 J. Michael Haynie with his award for 2015 Onondaga County Veteran of the Year (Photo by Wayne Westervelt)

Haynie was honored and humbled by the award, acknowledging that his efforts and past accomplishments in support of the nation’s veterans and their families are only possible as a result of tremendous partners and committed colleagues at the University and across the community.

Before beginning his academic career, Haynie served for 14 years as an officer in the U.S. Air Force. In 2006, when he joined Syracuse University, he founded the Entrepreneurship Bootcamp for Veterans with Disabilities (EBV) program, designed to empower veterans through entrepreneurship. The EBV program has since been expanded to nine other universities across the country and graduated more than 1,800 veterans. Haynie later went on to launch the IVMF at Syracuse University (2011), as the nation’s first interdisciplinary academic institute, focused purposefully on informing and impacting the policy, economic, wellness and social concerns of the nation’s veterans and their families.  To date, more than 35,000 service members, veterans, and military family members have participated in the IVMF’s vocational training and educational programs.

“As a veteran myself, I could not ask for a more rewarding and personally gratifying opportunity than to serve my fellow veterans and their families,” said Haynie when referring to the institute he founded, and expanding on his role as vice chancellor.  “Syracuse University, under Chancellor Kent Syverud’s leadership, is writing the next chapter in the story that defines the University’s long-standing commitment to those who have worn the uniform of our nation.”

Haynie shared that he looks forward to strengthening Syracuse University’s connection to and partnership with the broader regional community. “By working together to serve, support and leverage the success of our veterans, transitioning service members and their families; and by creating innovative public/private partnerships and initiatives, we are addressing the navigation challenges many of our veterans face when returning to the civilian workforce and back into our local communities.”

Haynie completed his doctoral degree in entrepreneurship and business strategy at the University of Colorado at Boulder, and his academic research has been published in many of the world’s leading entrepreneurship and business journals. Haynie is a sought-after advisor and speaker related to business strategy, veterans issues and entrepreneurship. His work has been widely featured by the media, including the CBS news magazine “60 Minutes” in a story titled “Succeeding as Civilians.” Haynie currently serves as the chairman of the U.S. Secretary of Labor’s Advisory Committee on Veterans’ Employment, Training and Employer Outreach. In 2015, U.S. Secretary of Veteran Affairs Bob McDonald appointed Haynie to serve as the vice chairman of the newly created MyVA Advisory Committee, chartered to set the course for long-term excellence and reform at the Department of Veteran Affairs.