“Even if you’re initiating a conversation, just one, then that’s one more conversation than was happening earlier,” says Tristan Ruzic, president of the Syracuse University Panhellenic Council. “If you can just prevent one more person from becoming a statistic, you’ve done your job.” 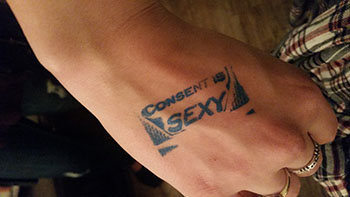 An entrance stamp at a local bar

Ruzic is spearheading a campuswide Greek Life initiative to raise awareness about sexual assault prevention. She has organized a union between the various Greek councils at the University to tackle the all-too-prevalent issue of sexual assault on college campuses, and she emphasizes that while Greek life is only one part of the larger issue, it is still their responsibility to take action in doing all they can to prevent sexual assault from occurring.

Expanding upon this idea, Ruzic also reached out to other schools across the country, seeking to create solidarity among the Greek community on a national scale. To date, Ruzic has the support of Greek leaders at George Washington University, Indiana University, Texas Christian University, Cornell University, the University of Pennsylvania and Oklahoma State University.

“Our goal is to facilitate a dialogue,” explains Ruzic. “We want to share useful information, tips and strategies. What worked for us? What didn’t? Where have other campuses achieved successes, and how can we build upon that success here on our campus?”

After all, this is no easy task. Ruzic fully acknowledges the vastness of the problem she is addressing, and realizes that sticking only to traditional methods of communication may not deliver the results she hopes for. So, together with the University’s Greek councils, Ruzic has been exploring alternative methods of getting the message out.

“We (Greeks on campus) have so much programming, sometimes the importance of one thing gets lost,” she says. “We need to raise awareness without people having to change their regular, daily schedules.”

Now, all along Greek row, fraternities and sororities are displaying massive “Yes Means Yes” banners on the sides of their houses. When students go to popular college bars, their entrance stamps read “Be Sure” and “Consent is Sexy.” Members of the Greek community have flooded their social media accounts with the official “Yes Means Yes” banner, and existing campus organizations dedicated to preventing sexual assault have joined the Panhellenic Council’s initiative.

In response to Ruzic’s work, Caroline Heres of the Girl Code Movement says, “I think it’s great! I think that the Yes Means Yes legislation is fantastic, and that it really does create a more positive outlook on the issue. We’ve worked with the Panhellenic Council before; we had a walk last semester that was sponsored by them, and I want to work with them more in the future.”

The Girl Code Movement was founded by Syracuse University students to address the problem of sexual assault on campus, and in the few short years since its creation, it has already received national news coverage for its efforts.

“My main objectives for the Girl Code Movement are to really begin and carry out a conversation regarding student-to-student sexual violence on campus,” says Heres. “I believe that talking about this in a student-to-student environment will create a better foundation for working to end it on campus.”

Moving forward, Ruzic has plans for several big events on campus. This Friday, Nov. 13, at 3 p.m., members of the Greek councils at the University will be meeting in the Quad for a demonstration to raise awareness of the issue. Additionally, Ruzic and the Panhellenic Council have set the goal of bringing at least one speaker to campus per semester.

“I think it’s time we put our resources and ideas together,” states Ruzic. “This is a nationwide epidemic, and it’s on us to be a part of the solution.”

This story is by Austin Galovski, a work-study student in the Office of News Services.