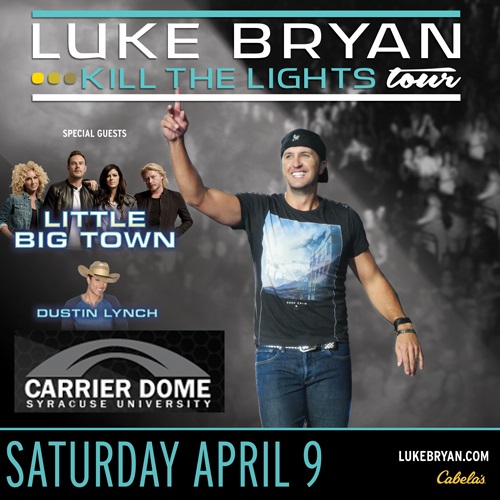 Tickets will go on sale beginning Friday, Nov. 13, at 10 a.m. for country singer Luke Bryan’s concert at the Carrier Dome next spring. The show, which will include Little Big Town and Dustin Lynch, will take place Saturday, April 9, at 7:30 p.m. Tickets will be available through Ticketmaster and the Carrier Dome Box Office.

Last month, Bryan announced his “Kill the Lights Tour” to hit the road in 2016. “Kill the Lights,” which is his fifth studio album, debuted at number one on the U.S. Billboard 200 chart. His latest single, “Strip It Down,” was the number one single on both country single charts. It was the second number one from the album.

Bryan won the top prize of Entertainer of the Year at this year’s Country Music Association Awards. He was also recently announced as Favorite Male Artist and Favorite Male Country Artist for the People’s Choice Awards 2016.