A communitywide celebration is planned as part of the unveiling and debut of the statues representing four iconic names associated with the University’s athletic program. The event will also officially dedicate the new Ensley Athletic Center on the Syracuse University campus.

Free and open to the public, the festivities are scheduled to take place Saturday, Nov. 14, at 11:45 a.m. The first 500 people in attendance will receive a complimentary Syracuse University Athletics souvenir.

Three of the statues to be unveiled will be located on Plaza 44, and will feature the likenesses of Jim Brown, Ernie Davis and Floyd Little. In addition, a statue of National Championship coach and World War II Silver Star Medal recipient Ben Schwartzwalder will be unveiled next to the Ensley Athletic Center. Cliff & Sue Ensley’s incredible generosity along with that of many other ballplayers led to the creation of the statue of Ben Schwartzwalder.

Plaza 44 was made possible thanks to the generous donation of Jennifer G ’02 and Jeff Rubin, whose company, SIDEARM Sports, provides the software and technology that powers the websites, live stats and video streaming for colleges, universities and high schools across North America. [Jeff] Rubin, who also serves as associate professor of practice in the School of Information Studies, says he hopes his gift will serve as an example to his two young sons about the importance of philanthropy.

“We want to give back to Syracuse University—to say thank you,” says Rubin. “Plaza 44 will be a place of happiness and pride for every Orange fan. It is an inspiring story and an integral part of Syracuse Football history.” 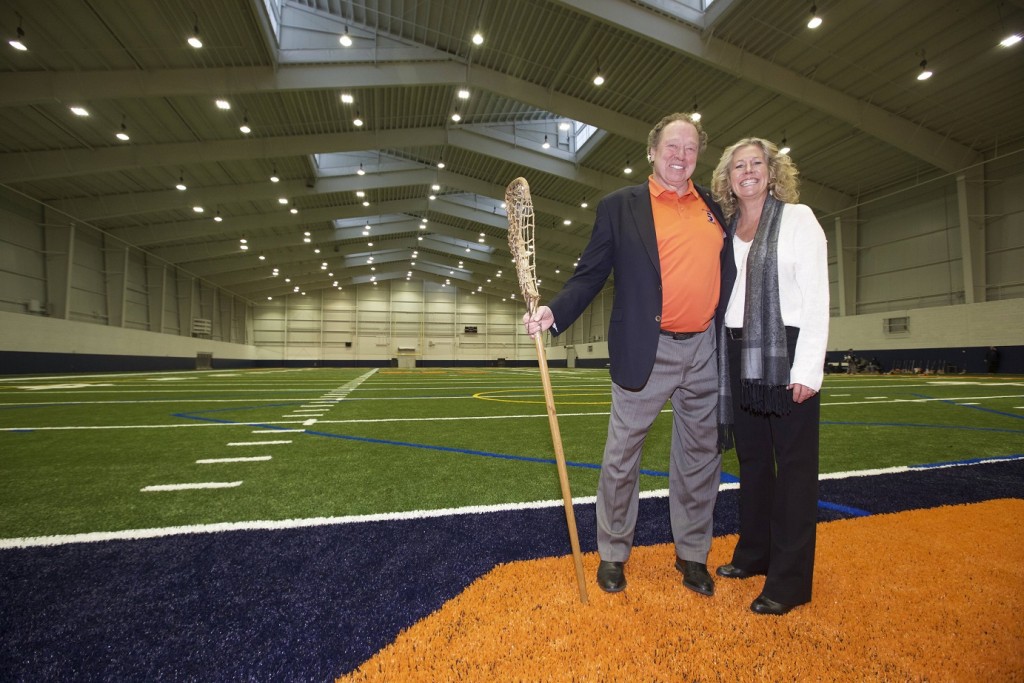 Cliff and Sue Ensley pose for a photo.

“Syracuse University, and in particular Syracuse athletics, has played such a significant role in my life,” says Ensley. “I am honored to have the opportunity to give back to the place that gave so much to me. I am especially grateful to Coach Schwartzwalder for the enormous impact he had on me and many other young student-athletes. He was a tough coach and mentor and will now forever be memorialized by the University he loved so much.”

The Ensley Athletic Facility is named in honor of Ensley, who along with his wife Sue provided a multimillion-dollar gift for the center. The founder and CEO of Leisure Merchandising Corp. in New Jersey, Ensley was a walk-on student-athlete who earned a football scholarship, setting interception and special teams records as a defensive back. He also wrestled; was named Most Valuable Player of the 1969 lacrosse squad, playing defense and serving as co-captain; and was honored as the 1969 Syracuse Athlete of the Year.

Initial support for the Ensley Center was sparked by a transformational $1 million gift in 2013 from former Syracuse Board of Trustees Chairman Dick Thompson and his wife, Jean, to advance SU athletics and celebrate the historic move to the Atlantic Coast Conference.
In recognition of their generosity, the turf field at the Ensley Center is named in honor of Jean Thompson’s father, John F. Phelan, a Sherrill, N.Y., native who was a freshman at SU and a member of the 1940 Orange football team. 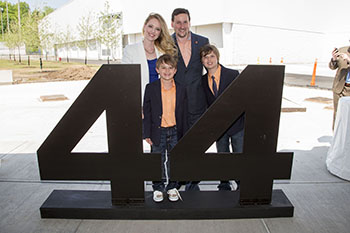 The Rubin family at groundbreaking ceremonies for Plaza 44. (Photo by Michael J. Okoniewski)

In 1941, when World War II broke out, Phelan left Syracuse after two years to join the armed forces and never returned. He was killed in action in France in 1944, giving the ultimate sacrifice in action for his country. He was survived by his wife, Jean Taylor Phelan, and Jean, his 6-week-old daughter. John’s daughter, Jean Thompson, ultimately went on to attend SU and graduated in 1966 with a bachelor’s degree from the College of Arts and Sciences. At Saturday’s event, a plaque inside the Ensley Center celebrating John Phelan’s life and legacy will be unveiled.

“Sports, and especially football, were a very important part of my father’s life. I know he would be honored to know the University’s indoor field for the football team was named after him. He would be proud to know that future generations of student-athletes will have such a wonderful field and facility in which to practice,” says Jean Thompson.

The 87,000-square-foot Ensley Athletic Center features a full 120-yard field with a FieldTurf surface lined for football, men’s lacrosse and women’s lacrosse. The playing surface’s footprint is the same as the Carrier Dome’s floor. The facility has a 65-foot roof at the peak, enabling passing and kicking activities, and the roof features a one-of-a-kind alternating dormer system that allows in natural light. The Ensley Athletic Center opened in January 2015 as the latest major facility investment for Syracuse Athletics. Located near Manley Field House, just east of J.S. Coyne Stadium, the Ensley Athletic Center is part of the Lampe Athletics Complex. 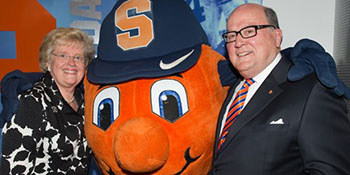 Dick and Jean Thompson with Otto

“We are proud—as a University and an athletics department—to celebrate with our fans and members of the Syracuse community the honoring of four great men whose names are synonymous with our Athletics program and to dedicate an amazing athletics center that will greatly benefit our student-athletes,” says Coyle.

The four men being honored with statues who represent a storied history for Syracuse University football are:

Jim Brown
Brown wore #44 for the Orange from 1953 to 1957. He was a 1956 All-American and a 1995 College Football Hall of Fame inductee. Widely regarded as one of the greatest athletes in history, Brown was a four-sport star at Syracuse (football, lacrosse, basketball and track). In 1982, Brown was presented with the NCAA Silver Anniversary Award. In 2002, Brown was named the “Greatest NFL Player” by Sporting News and is on the All-Time NFL Team, 1960s All-Decade Team, NFL’s 50th Anniversary Team and the NFL’s 75th Anniversary Team. Brown was inducted into the Pro Football Hall of Fame in 1971, the Lacrosse Hall of Fame in 1983 and the College Football Hall of Fame in 1995. His uniform #32 was retired by the Cleveland Browns. At the age of 30 and at the peak of his playing career, Brown retired from professional football to concentrate on acting. He has more than 40 film credits to his name. As a social activist, Brown supported African American causes by helping to create the Negro Industrial Economic Union in the 1960s and founding the Amer-I-Can program in the 1980s, which strived to turn around the lives of young gang members.

Ernie Davis
Davis, the first African American to win the Heisman Trophy, wore #44 for the Orange from 1958-1962. He was a 1961 Heisman Trophy Winner, an All-American in 1960 and 1961 and a College Football Hall of Fame inductee in 1979. Davis was selected by the Cleveland Browns with the first pick in the 1962 National Football League Draft. However, before the former Orange stars could ever suit up as NFL teammates, Davis contracted leukemia and died on May 18, 1963. He was 23. Both houses of the U.S. Congress eulogized Davis, and his wake in Elmira, N.Y., drew more than 10,000 mourners. In the fall of 1979, Davis was a posthumous induction into the National Football Foundation’s College Football Hall of Fame and he was named to Syracuse University’s All-Century team.

Floyd Little
Little wore #44 for the Orange from 1963-1967, and was a three-time All American. He was also the ECAC Player of the Year in 1966, a College Football Hall of Fame inductee in 1983 and a Walter Camp Foundation Distinguished American Award winner in 2012. In all, Little is the recipient of more than 19 professional athlete achievement awards and more than 31 distinguished community service awards. In 1974, Little received three of the most prestigious community service awards, including the YMCA Brian Piccolo Award, the Distinguished American Award for Community Service presented by the Connecticut Hall of Fame, and the American Jewish Community Appeal for Human Relations Citation in recognition of the outstanding contributions he made toward the betterment of man and his community. Little has been honored by the Colorado Sports Hall of Fame, the Denver Broncos Ring of Fame, the Gator Bowl Hall of Fame and the African American Ethnic Sports Hall of Fame. In 1992, Little was presented with the NCAA Silver Anniversary Award.

Floyd ‘Ben’ Schwartzwalder
Schwartzwalder, who served as head football coach from 1949-1973 (including the title year of 1959), was 1959 National Coach of the Year, along with serving as president of the American Football Coaches Association in 1967, before being inducted into the College Football Hall of Fame in 1982. Before his career as a football coach, Schwartzwalder served in World War II as a paratroop officer in the famed 82nd Airborne Division and was in the first wave of troops on D-Day in 1944. Jumping far behind enemy lines and miles off target, Schwartzwalder organized his command immediately and carried out his mission for which he received a Silver Star. He rose to the rank of major and was also awarded the Bronze Star and Purple Heart, four battle stars and a Presidential Unit Citation.