University Teams Up with Walmart to ‘Greenlight a Vet’ 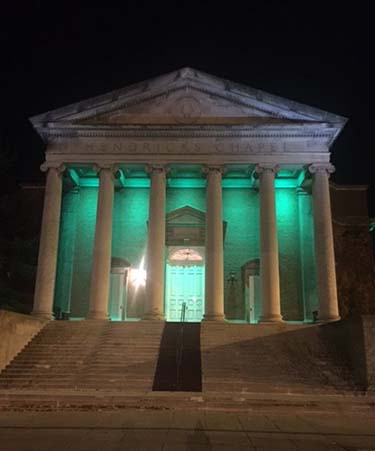 Hendricks Chapel is lit up in green as part of the “Greenlight a Vet” campaign. The chapel will remain lit in green all week in honor of veterans.

In anticipation of Veterans Day, the Institute for Veterans and Military Families (IVMF) has announced it is among a handful of organizations nationwide teaming up with Walmart for its new “Greenlight a Vet” campaign. An 18-month national effort, the “Greenlight a Vet” campaign aims to shine a light on the impact transitioning veterans make in and out of uniform in communities across the country.

“IVMF is proud to be a part of Walmart’s campaign to ‘Greenlight A Vet’ in support of those who have served in the military and their families,” says Mike Haynie, vice chancellor and executive director of the IVMF. “Participating in a national movement, designed to recognize those who have worn our nation’s uniform as valued, contributing members of our communities, is our way of encouraging all Americans to meaningfully engage with veterans and their families and by so doing, appreciate them as respected civic assets.”

Other organizations involved in the initiative include: Team Red, White and Blue; Team Rubicon; Hire Heroes USA; and Blue Star Families. They, along with IVMF, have aligned with Walmart to help create visible and actionable national support for America’s veterans and their families.

Chancellor Kent Syverud, who in his April 2014 inaugural address said Syracuse University must once again become the best place for veterans, says he is pleased to see IVMF playing such an integral role in fostering an environment that positions the nation’s veterans for success.

“This partnership is a testament to the hard work of the IVMF team and the Institute’s innovative philosophy,” says Chancellor Syverud. “The contributions of our nation’s veterans and their involvement, as well as their families, in our communities are vital to our nation’s success and prosperity. I congratulate IVMF on this accomplishment and look forward to seeing how this partnership positively impacts the nearly 23 million veterans in the United States.” 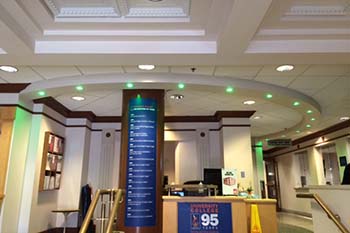 University College lights its lobby in green to support the “Greenlight a Vet” campaign.

There are a number of ways members of the Syracuse University interested in showing their support for veterans through a visible symbol can “Greenlight A Vet”:

To learn more about the “Greenlight a Vet” campaign, and in particular, how IVMF is leveraging the intellectual, human and social capital of higher education, in service to America’s veterans and their families, visit http://greenlight.vets.syr.edu.