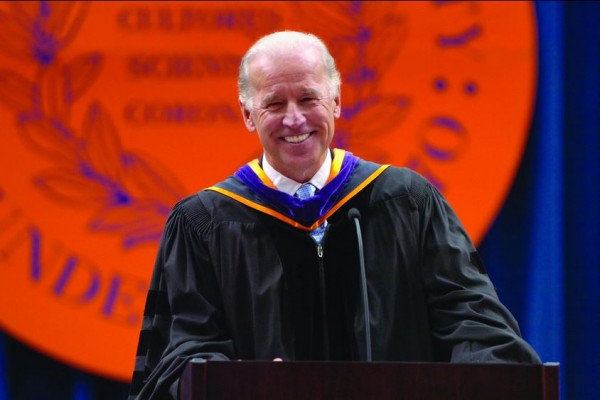 As part of the “It’s On Us” campaign’s National Week of Action, Syracuse University will host Vice President of the United States Joseph R. Biden Jr. L’68 on Thursday, Nov. 12, in Goldstein Auditorium in the Schine Student Center.

“Syracuse University has been working hard to raise awareness about and to put an end to sexual and relationship violence,” says Chancellor Kent Syverud. “All of this hard work will be nationally recognized next week when Vice President Biden, who has been one of the nation’s leading advocates for this cause, visits our campus.”

Syracuse University students can pick up tickets from the Schine Student Center Box Office, Tuesday, Nov. 10 and Wednesday, Nov. 11 from 9 a.m. to 10 p.m. Students must have a valid student identification card to present at time of pick-up. [Editor’s update: At this time, all tickets have been distributed.]

As this is a student-focused event, there will be a limited quantity of tickets available for faculty, staff, and the general public. Tickets for this group are also available at the Schine Student Center Box Office, Tuesday, Nov. 10 and Wednesday, Nov. 11 from 9 a.m. to 10 p.m. Faculty, staff, and the general public will need to present a valid form of identification at time of pick-up.

Space for this event is extremely limited, and doors will open at 9:30 a.m. This ticket is complimentary and not for sale or re-sale. All attendees will go through airport-like security and should bring as few personal items as possible. A bag and coat check will be available in Room 228B. Cameras are permitted.

The vice president’s visit comes just months after Chancellor Syverud appointed 30 members of the University community to a standing Task Force on Sexual and Relationship Violence, acting on a recommendation made by the Chancellor’s Workgroup on Sexual Violence Prevention, Education and Advocacy. That task force is charged with looking critically at the University’s sexual assault and relationship violence services, policies and programs every semester.

Co-chaired by Professor and Dean of the School of Education Joanna Masingila and Senior Vice President and Dean of Student Affairs Rebecca Reed Kantrowitz, the task force is working closely with Samantha Skaller ’17, a student in the College of Visual and Performing Arts and one of only 17 students nationwide to be selected to serve on the national “It’s On Us” Student Advisory Committee, which has been tasked with playing a key role in delivering the “It’s On Us” message to campuses across the country.

The task force has a number of activities planned for next week’s National Week of Action, including a film screening, panel discussions and other awareness initiatives. Skaller says the University’s efforts have been noticed by her counterparts in Washington.

“Our community has been working tirelessly to raise awareness and put an end to sexual assault and relationship violence once and for all,” says Skaller. “I am confident that is why Vice President Biden has selected our campus for one of his visits. I hope my fellow students will join me next week in taking the pledge and making a personal commitment to help keep women and men safe from sexual assault.”

For a complete listing of events scheduled for the National Week of Action can be found here.