Three trombone ensembles from central and northern New York will be featured in a concert on Sunday, Nov. 8, honoring Bill Harris, longtime faculty member in the College of Visual and Performing Arts’ Rose, Jules R. and Stanford S. Setnor School of Music. 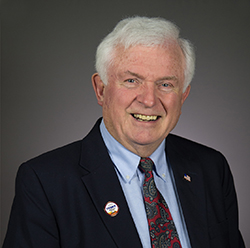 Bones East, the Crane Trombone Ensemble and the Eastman Trombone Choir will perform at 5 p.m. in the Rose and Jules R. Setnor Auditorium, Crouse College. The concert is free and open to the public.

Local ensemble Bones East, with Mark Anderson, director, and James Tapia, conductor, will perform works by Smith, Albam and Haydn. Under the direction of Mark Hartman, the Crane Trombone Ensemble of SUNY Potsdam’s Crane School of Music will perform selections by Bizet, Bach, Coots, Michel and Bart. The Eastman Trombone Choir of the Eastman School of music will perform works by Ewazen, Grieg, Edelman, Massaino and Davern under co-directors Mark Kellogg and Larry Zalkind. View the full program.

Harris has served as the trombone instructor at the Setnor School of Music since 1971. He is also a professor emeritus of music at Onondaga Community College. He retired in 2009 as principal trombonist with the Syracuse Symphony Orchestra after 48 years. He joined the orchestra as a charter member in 1961, while he was an undergraduate music student at Syracuse University.

Free and accessible concert parking is available on campus in the Q-1 lot, located behind Crouse College. If this lot is full or unavailable, guests will be redirected. Campus parking availability is subject to change, so please call 315-443-2191 for current information or for more information about the concert.