Syracuse SymposiumTM continues its “Networks” theme with an evening devoted to cutting-edge filmmaking. 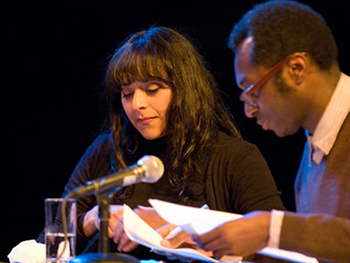 Anjalika Sagar and Kodwo Eshu, founders of the Otolith Group

The Otolith Group, an award-winning London-based artist collective, will be the focus of a special event on Thursday, Nov. 12, at 6:30 p.m. in Hosmer Auditorium of the Everson Museum of Art (401 Harrison St.). The program features an indoor screening of works by the group, including “Anathema” (2011), as well as a live stream of an interview with co-founder Kodwo Eshun.

The program, which is free and open to the public, includes a reception. For more information, contact the Humanities Center in the College of Arts and Sciences at 315-443-7192 or visit http://syracusehumanities.org.

The evening is also part of a yearlong program titled “We Were Never Human,” involving the Urban Video Project (UVP) and its parent organization, Light Work. “Anathema” will be shown at UVP’s outdoor architectural projection venue at the Everson Museum of Art from Nov. 5-Dec. 19, screened onto the north façade of the building and are visible from the plaza every Thursday-Saturday from dusk to 11 p.m.

“Kodwo Eshun uses film essays to examine lived conditions, engage current events and unpack history,” says Vivian May, director of the Humanities Center and associate professor of women’s and gender studies. “Working at the nexus of visual culture and contemporary art, Sagar—and, by extension, The Otolith Group—seeks to rethink cultural production in the context of precarious global conditions. This work approaches film in new and important ways.”

Eshun founded the Otolith Group with Anjalika Sagar in 2002. Since then, the collective has exhibited, installed and screened works all over the world. Many of the group’s projects are commissioned by public and private organizations, and involve research, installations and publications.

No doubt that The Otolith Group’s self-described “collaborative and discursive practice” is an extension of its founders’ liberal arts training. (Sagar studied anthropology and Hindi at the University of London; Eshu, English literature at University College, Oxford.) Hence, their films and solo exhibitions, which number in the dozens, draw on material found within a range of disciplines, particularly the moving image.

“[Our] work is formally engaged with research-led projects, exploring the legacies and potentialities of artist-led proposals around the document and the essay film, the archive, the aural and sonic medium, speculative futures and science-fictions,” says Eshun, whose work resides in the Guggenheim Museum in New York City. 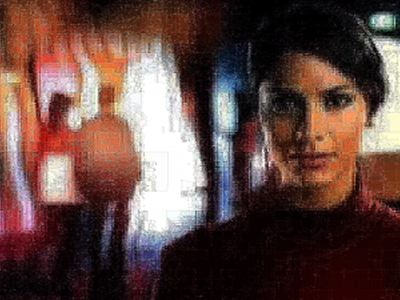 “Anathema” exemplifies this cross-cutting aesthetic. A 36-minute high-definition video, the work re-imagines liquid crystals as sentient entities that possess fingertips and eyes. The result is what Sagar describes as a commentary on “communicative capitalism.”

“’Anathema’ can be understood as an object-oriented video that isolates and recombines the magical gestures of dream factory capitalism,” she says. “By bringing the telecommunicating couplings of mother-father-daughter-son-machines and boyfriend-girlfriend units into contact with the conductive imagery of liquid crystallization, [the film] proposes itself as a prototype for a counter-spell assembled from the possible worlds of capitalist sorcery.”

The program is co-sponsored by the UVP and Light Work Visual Studies, administered by Light Work and the University; the Visiting Artist Lecture Series in the School of Art and the Department of Transmedia, both in the College of Visual and Performing Arts; the Coalition of Museums and Art Centers; the Connective Corridor; the Everson Museum of Art; and the New York State Council on the Arts.