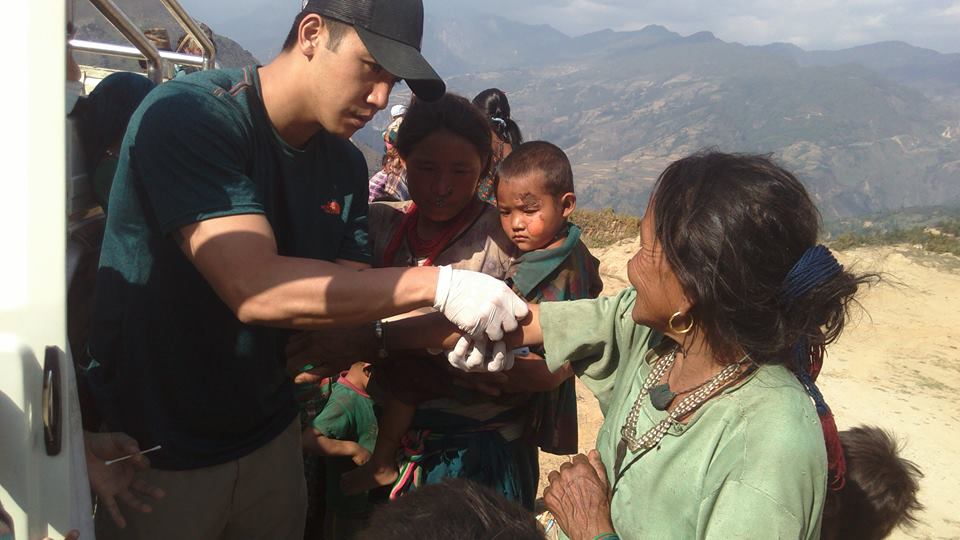 Brian Kam assists people in need of medical attention following the earthquake in Nepal earlier this year, as part of his work with Aythos. Photos provided by Aythos

His plans quickly changed as he arrived a week after a devastating 7.8 magnitude earthquake hit the mountainous country on April 25.

Thousands of people died. Thousands more were injured and hundreds of thousands were left homeless. Buildings were leveled and livelihoods were lost. In remote areas, survivors were cut off from food, shelter and medicine.

“My focus became medically oriented, which was complementary to the combat medical training I had received during my time in the Marine Corps,” Kam says. “Originally, I intended on only staying one month, but one eventually turned into three and every day was a new learning experience.”

Kam is a senior majoring in international relations and Middle Eastern studies in the College of Arts and Sciences and the Maxwell School of Citizenship and Public Affairs and wanted to learn more about international aid work.

Kam and Rachel Penner, a graduate student in the international relations program in the Maxwell School, both connected with the U.S.-based organization Aythos. The NGO was co-founded by Maxwell School alumnus Beau Miller G’10, who is Aythos’ president and executive director, and has worked in Nepal for six years. 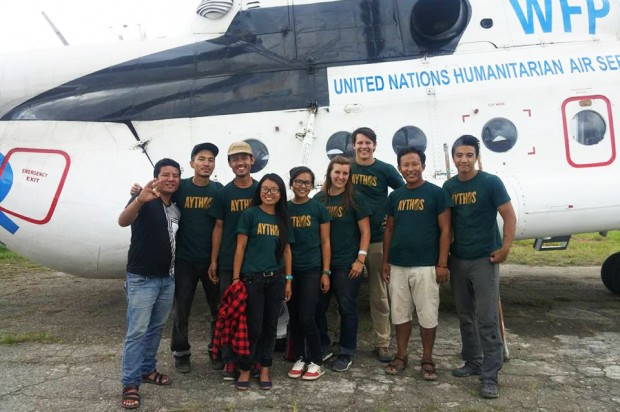 Rachel Penner, fourth from right, and Beau Miller, third from right, stand with other volunteers near a mission transport plane.

Penner, who is interested in disaster response and development, was also drawn to the work Aythos was doing.

“Since Aythos was focused on development through their agricultural work before the earthquake, I knew that they would have a unique perspective on how to respond to a crisis with an eye toward long-term efforts,” Penner says.

Aythos works with communities on local ideas for development projects, such as agricultural projects in beekeeping and fruit tree planting, but it is now focused on relief and recovery following the quake.

The images were stark when they first arrived.

“Nepal was in a state of chaos and most people were sleeping outside for fear of ensuing aftershocks,” Kam says. “Inside the Kathmandu Valley at Boudha, life was relatively unaffected, despite the heavy damage in and around Durbar Square and other UNESCO sites. In Boudha, a large Tibetan refugee region, things seemed calm, stores and pharmacies well stocked.”

Other areas did not fare so well.

“The picture was drastically worse outside of the Kathmandu valley. For example in the highland villages of Helambu, Okhreni and Sepaguan where transportation became increasingly difficult, the situation was increasingly more critical,” Kam says. 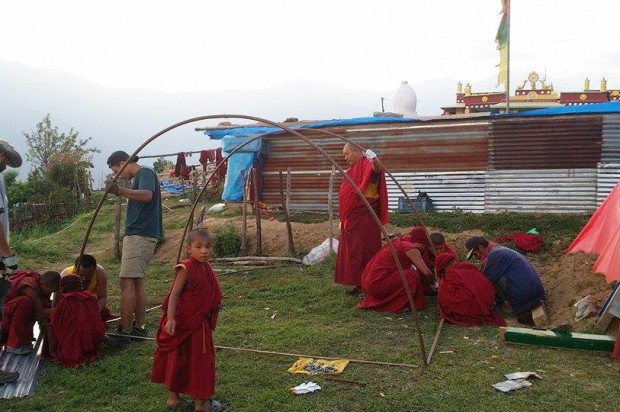 Volunteers help construct shelters at a Buddhist nunnery in Helambu. Aythos and ROKPA International teamed up to deliver eight shelters that will allow the nuns to continue their studies until the nunnery is rebuilt.

Kam would deploy into the countryside with a small group from Aythos on various missions, sometimes with other NGOs and international groups.

“In the highland villages during post-disaster relief phase, I helped distribute food and tents, and provided medical assistance, ranging from traumas, wound infections to general medical care,” Kam says. “From my second month and beyond, I transitioned to early recovery work, including outhouse constructions, construction of temporary metal shelters and distribution of solar-powered lighting, water piping and water tanks.”

A lot of the work involved dealing with water and sanitation issues in villages that were forced to relocate, Penner says.

They visited villages that Aythos had worked with before to see how they could help their situations, especially through the monsoon season.

“We worked with local villages to build biosand filters and pit latrines in an effort to protect against water-borne diseases,” Penner says. 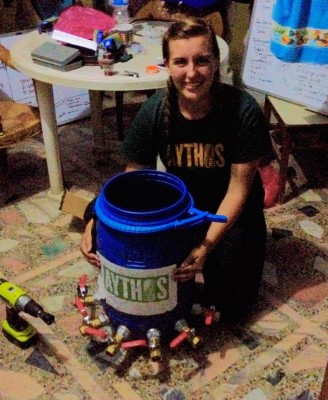 Rachel Penner displays a water distribution tank that allowed the biosand-filtered water to be distributed to different housing clusters in a Nepalese village. Penner designed the tank to ensure the structural integrity of the main, 2,000-liter storage tank.

Miller says Kam and Penner “were both extremely important to our success responding to the earthquakes.”

The demanding work required going into remote areas and distributing aid to places where many times they were the first organization to reach the affected communities.

“Brian was there shortly after the initial earthquake and his first aid skills were invaluable to Himalayan communities,” Miller says. “He treated injuries and cleaned people’s wounds in order to prevent infections.”

“Both Brian and Rachel really exemplified global citizenship as they came into a chaotic and unfamiliar situation and worked tirelessly under stressful conditions to help the people of Nepal,” Miller says.

Kam and Penner valued the time they spent with Miller and his Aythos team.

“Working for a small NGO gave me a strong appreciation for just how much impact development and relief efforts can have when an organization is communicating directly with the beneficiaries of the projects and involving them as partners in the efforts,” says Penner, who is currently studying for a master’s in development studies at the Hertie School of Governance in Berlin as part of Maxwell’s Atlantis Trans-Atlantic Degree Program.

“We had plenty of opportunity to find creative solutions to local issues, and our team was able to make quick work of implementing those solutions,” she says.

Kam, who is back in classes at Syracuse and preparing to graduate in December, has set up a GoFundMe page to fund solar-powered charging kiosks with rechargeable power tools to donate to villages in Nepal that need them.

He wants to return to the country that he grew to love, with its remarkable landscapes and its resilient and generous people. His plans also include heading to nursing school, to continue service to others, especially in disaster and humanitarian crises.

“Nepal is a place that will always hold great significance and a place in my heart—with all of the experiences, epiphanies and friends I have come across,” Kam says. 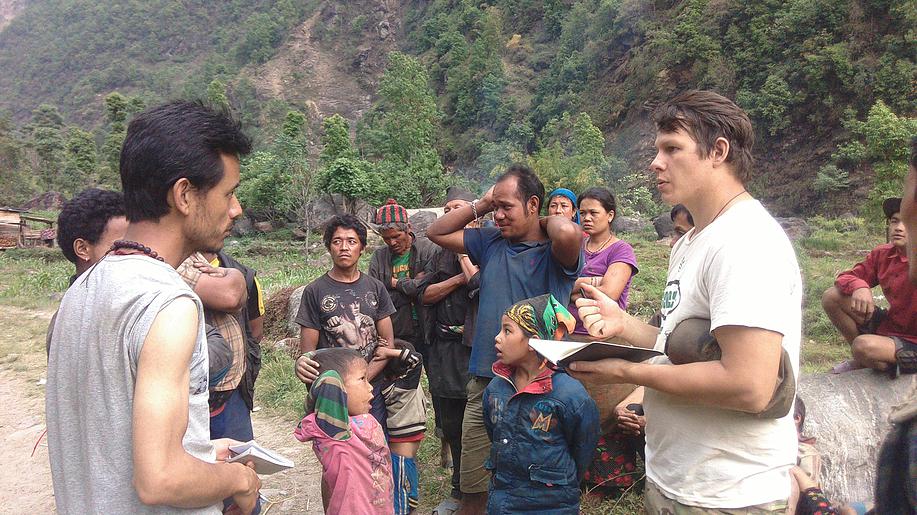 Beau Miller of Aythos, right,  meets with members of a Nepalese community following the earthquake earlier this year.