The S.I. Newhouse School of Public Communications last week honored 50 accomplished alumni at “50Forward,” a gala event in New York City observing 50 years of the Newhouse School and celebrating the strength of the school as it moves into the next 50 years. Mike Tirico ’88, sportscaster with ABC and ESPN, served as emcee. 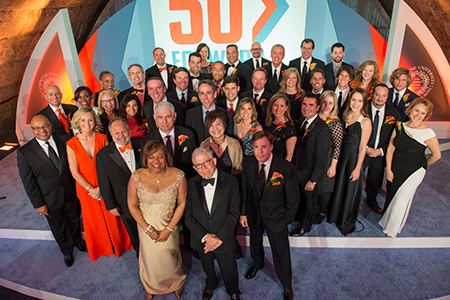 “This is an opportunity to honor 50 of our stellar alumni and their impressive achievements,” said Dean Lorraine Branham as she welcomed guests. “But more than that, we look forward—hence the phrase ’50Forward’—and  celebrate the bright future of the school, its future graduates and what is sure to be another outstanding 50 years.

“Tonight we bring together generations of Newhouse alumni—the legends and leaders, the innovators and entrepreneurs, as well as today’s movers-and-shakers, the forward thinkers and media leaders who, like their predecessors, will continue to represent the Newhouse School and extend its reputation as—I’m just going to go ahead and say it—the number one communications school in the country!” 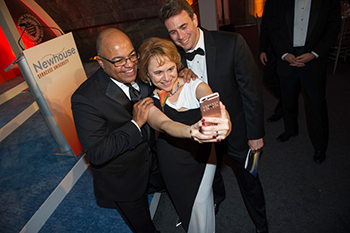 Mike Tirico ’88, Melissa Richards-Person ’89 and Oliver Lay ’89 pose for a “selfie” at the end of the gala program. Tirico was emcee and Richards-Person was one of the 50 honorees.