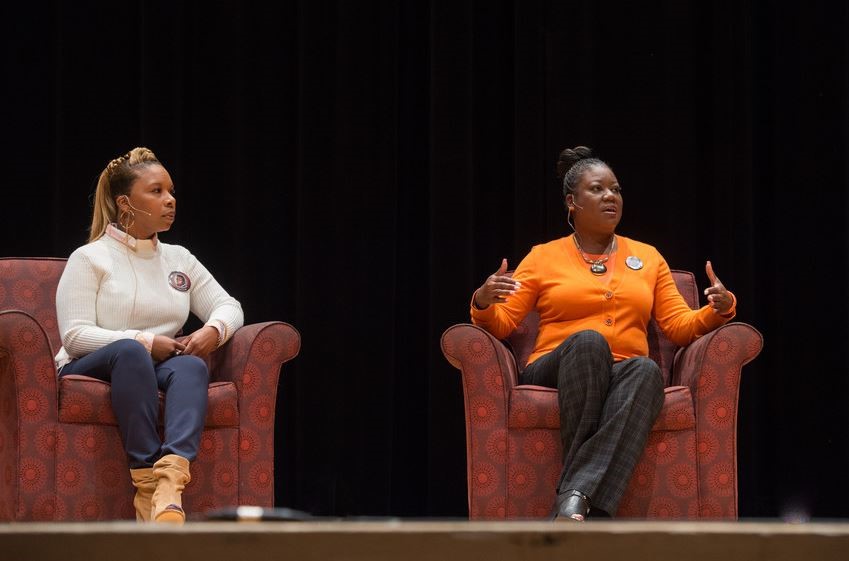 Lesley McSpadden (left) and Sybrina Fulton speak during the “(In)Justice for All” event at Goldstein Auditorium.

“When titling tonight’s event, we wanted something that would reflect the multiple intersections of content and the depth of the thoughts that would be evoking,” said Travis Davis ’16, president of the University’s National Pan Hellenic Council (NPHC) and one of the moderators of the discussion. “Martin Luther King Jr. once said, an injustice anywhere is a threat to justice everywhere. We are caught in an inescapable network of mutuality tied in a single garment of destiny; whatever affects one directly, affects us all indirectly.”

During the nearly two-hour discussion, moderator Nina Rodgers ’16 deftly asked questions of the panelists, including questions submitted via social media. Fulton and McSpadden painted vivid images of the sons they lost. Both teens were shot to death: Trayvon Martin by neighborhood watch volunteer George Zimmerman, and Michael Brown by police officer Darren Wilson. Zimmerman was acquitted of second-degree murder charges, while a grand jury did not charge Wilson with a crime. 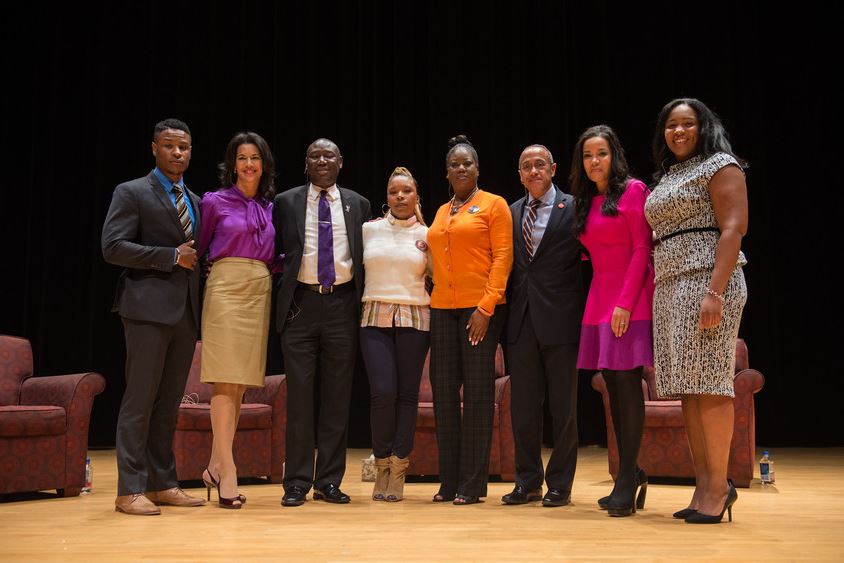 “He was old school like me,” said Fulton in describing Trayvon. “He liked to go to the skating rink, he liked to go to the movies. Two years before he was killed, he started getting into girls at like about 15; so he had to have on the latest fashion. He wanted cologne on, he had to make sure he had his hair cut. He used to keep those ear phones in his ears all the time. I just miss his smile. And I just miss just being around him.”

McSpadden described her son Michael as “loving and patient,” and talked about one of her last memories of her son, a fishing trip that lasted all afternoon. She said Michael wouldn’t leave until he reeled one in, a tribute to his patience, according to McSpadden. “I miss my son too,” said McSpadden. “I was ready to watch him grow into a man. I can’t hear his voice so I can only look at a picture to see his face, because I put my heart into getting him to 18 and making sure he stayed in school and did the right thing.”

The discussion also explored policing tactics and the Black Lives Matter movement. CNN anchors Hostin and Whitfield talked about media coverage of both cases, while Crump credited young people, like many of those in attendance, with giving the story life and legs.

“The young people and social media moved the major media, when all of you got on social media saying that ‘I am Trayvon’ … it helped people pay attention and say Trayvon’s life matters,” said Crump.

Chief Maldonado called it an honor to be part of the panel, and added context to the discussion from a police perspective, but also, as he pointed out, a parent.

“It’s a trying time in this country now. I think that there’s an examination going on right now about police/community relationships,” said Maldonado. “I think that it’s my responsibility as a law enforcement executive to make this campus, to make this country, to make this world just a little smaller so we can all be able to communicate with each other effectively.”