Chet Kanojia, who founded the pioneering online television technology company Aereo, will visit the S.I. Newhouse School of Public Communications on Thursday, Nov. 5. “Aereo: the Future was Then—a discussion with media tech pioneer Chet Kanojia” will be held at 2 p.m. in the Joyce Hergenhan Auditorium in Newhouse 3. Roy Gutterman, director of Newhouse’s Tully Center for Free Speech, will serve as moderator. 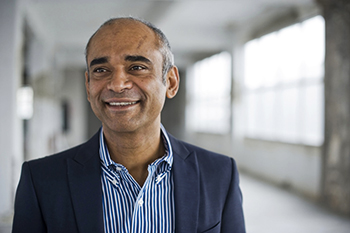 Kanojia, who holds more than 14 patents in fields ranging from robotics to data communications systems, is an innovative leader known for pushing beyond the conventional and developing breakthrough solutions.

Aereo, which launched in 2012, was an online television platform that enabled consumers to record and watch live HD broadcast television on Internet-connected devices via a cloud-based OTA antenna and DVR. Though the company prevailed at the federal district court and appellate level, the U.S. Supreme Court ruled against Aereo in a copyright lawsuit brought by a consortium of broadcast networks. The company ceased operations in June 2014.

Currently, Kanojia is founder and CEO of Project Decibel, a Boston- and New York City-based incubator focused on developing next generation technology to enhance and enrich the consumer experience.

Previously, he was the founder and CEO of Navic Networks, which grew to be the industry leader in advanced television advertising. The company was acquired by Microsoft in 2008.

Kanojia was recognized as one of  the “Top Disruptors of 2013” by Forbes magazine, noted as part of Vanity Fair’s 2013 “Next Establishment List” and named one of Inc. Magazine’s 2013 “Entrepreneurs of the Year.” Aereo’s technology was also named one of TIME magazine’s Top 50 Best Websites (2012) and a Top 50 Technology (2013) by MIT Technology Review.

The event is free and open to the public. For more information, contact Gutterman at 315-443-3523 or rsgutter@syr.edu.