A public performance of this year’s Bank of America Children’s Show “New Kid,” produced by Syracuse Stage and the Department of Drama in the College of Visual and Performing Arts (VPA), will be held at 11 a.m. on Nov. 7 in the Archbold Theatre at Syracuse Stage. One hour in length, “New Kid” is appropriate for all ages.

This performance is free and open to the public. 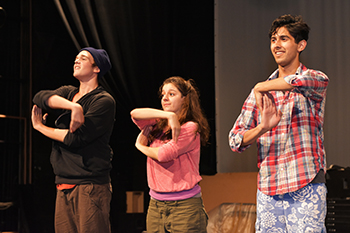 A scene from “New Kid” (Photo by Brenna Merritt)

Performed in striking visual terms under the direction of Lauren Unbekant, “New Kid” offers an extraordinary opportunity to share a rich theatrical experience with young students. The director, designers, performers and production crew are students and professionals from the Department of Drama and Syracuse Stage.

In the play, Nick just immigrated to America from a country called Homeland and is struggling with a new language and a new way of life. The kids at his new school make fun of him because of his customs and strange language. The twist is, in “New Kid” the Americans speak a kind of gibberish that neither Nick nor the audience understand. “New Kid” promotes tolerance, compassion and addresses racism, prejudice, peer pressure and conflict resolution.

The sold-out fall tour of “New Kid” began in September and continues through mid-December. Over 9,000 students in 23 schools across a five-county region will see the production running through Dec. 10. Tour stops include elementary schools in the Syracuse City School District and throughout Central New York, including performances in Auburn, Oswego, Syracuse, Baldwinsville, Cicero and Parish.