School of Information Studies (iSchool) Associate Professor Jennifer Stromer-Galley was installed as president of the Association of Internet Researchers, one of the earliest academic associations to take up topics related to the Internet, at its annual conference last week. 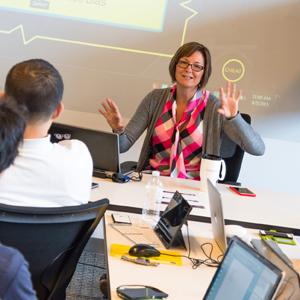 The association was formed in 1999. Stromer-Galley has been an active member since the organization’s first conference that year. For the past two years, she has served as its vice president. The association provides an international, interdisciplinary space for discussion and research

The first initiative for her presidency is having greater involvement and public activity around discussions of the ethics in big data research, she says. “With big data growing as an opportunity for research, that issue brings with it pretty important ethical considerations. We were the first academic organization to have a series of guidelines around ethics involving the Internet, so I would love to see us continue the strength we’ve had historically and be more involved in the discussion of ethics involved in big data research.”

A second goal of her presidency is to consider taking the annual conference to a southern hemisphere country, such as Brazil. In addition, the association is seeking to better diversify its membership to include more scholars of color and those of LGBT orientation, she added.

“From my point of view the strength of our association and our conferences is that we are a genuinely intellectual community that likes to think broadly about the performance aspects of the Internet, and we offer the opportunity for scholars to think about what people can do with the Internet. There is a dimension of the Internet that is about play and performance, and a goal is to strengthen that aspect of the organization’s focus,” Stromer-Galley says.

After serving as president for two years, Stromer-Galley will continue as the organization’s past president for another two years. Throughout this year and as part of her second year as vice president, she was centrally involved in the planning and organizing of the annual conference, which took place this year in Phoenix. Its theme was “Digital Imaginaries.”