Fire in the night signals the return of Agamemnon from 10 long years of war in Troy. Triumphant and with a captive slave, the prophetess Cassandra, in tow, the warrior king arrives home and is welcomed by Clytemnestra, wife and mother, who seethes with a vengeance born of the slaughter of their daughter Iphigenia. Revenge begets revenge; fate will be fulfilled. The first great play of Aeschylus’ Oresteia trilogy, “Agamemnon” delivers a visceral and haunting theatrical experience. 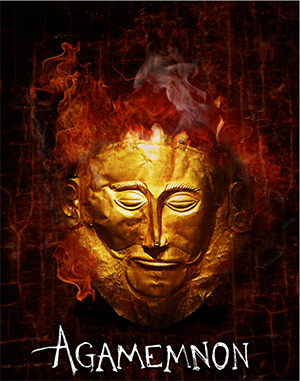 “Agamemnon” was produced in 485 B.C. in Athens and is one of Aeschylus’ greatest tragedies from the Oresteia trilogy. The trilogy is composed of three plays concerning the stories of Agamemnon, Clytemnestra and Orestes. The other two plays are “The Libation Bearers” and “The Eumenides.”

“We all have an idea of what it must be like to lose a daughter, go to war and to want vengeance,” says Rodney Hudson, director and professor in the Department of Drama. “I want to capture a primal quality of theater and offer an opportunity to connect with a deeper level of acting, and also of our being.”

Aeschylus was the first Greek dramatist to introduce the use of more than one actor in a play, as Greek plays originally consisted of a single actor to portray all of the characters. With more than one actor, Aeschylus was able to cut down lengthy choral parts emphasized in earlier works, and include more dialogue. He would also use masks, headdresses, high boots and vibrantly tailored garments for the actors.

Hudson will present “Agamemnon” by telling events in a series of scenic pictures, bringing in a multitude of cultural references to underscore the universality of Aeschylus’ play.

“We’re making pictures and telling a story. Some people have told me I’m trying to make the movie version,” says Hudson. “But I’m inspired by directors I’ve worked with such as Andrei Serban and Robert Wilson. They made use of spectacular visual images.”

As a professional actor for over 35 years, Hudson has performed across the country in major regional theaters, and he was a company member with the famed American Repertory Theater in Cambridge, Mass. As a soloist, he has performed selections from Broadway with major orchestras, including the Minnesota Orchestra, St. Louis Symphony Orchestra and the Houston Symphony. Hudson is a member of Actors’ Equity Association.