Thursday, Nov. 5, marks the opening of “PLAN GAMES: Disciplinary Rules and Circumstantial Plays,” an exhibition in the Slocum Hall Marble Room of built work designed by School of Architecture professor and architect Arthur McDonald. McDonald is retiring at the end of the fall 2015 semester following more than 40 years of service to the school. 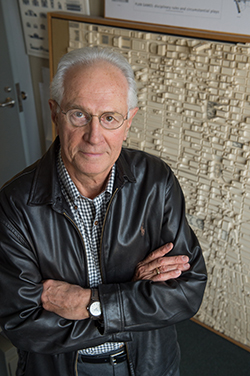 According to McDonald, “PLAN GAMES” is suggestive of a mode of architectural design production that involves “rules” and “plays.” “Disciplinary rules” refers to formal principles related to particular architectural organizational devises and typologies. Circumstantial “plays” refers to the opportunities afforded by the particulars of program and site for invention within the “rules” of the plan type or “game.” It is these inventive “plays” that transform the generic type (the abstract) to the relative (the empirical). In this exhibit, the formal types consist of two simple means of spatial organization deploying an element and a device: the wall and the grid.

McDonald received a bachelor of architecture degree from Pratt Institute and a master of architecture degree (urban design) from Cornell University, where he received the Eidlitz Traveling Fellowship. After several years of professional practice as a registered architect in New York City, including a position as project architect with Ulrich Franzen & Associates, he joined the faculty of the School of Architecture in 1974. He served as head of the undergraduate program from 1982-1989, as chair of the graduate program from 1996-2002 and as interim dean of the school from 2002-2004.

McDonald’s teaching and research interests lie in architectural and urban design, urban housing, the history and theory of urban planning, and the theoretical underpinnings of the modern movement. He has continued to practice architecture in Syracuse since 1979.

“Professor McDonald is among the most influential and revered professors to teach at Syracuse Architecture, among the most distinguished architecture faculty at any university in this or in any country.  He will be missed,” says Dean Michael Speaks.

“The significance of Art’s contribution to the growth and transformation of the School of Architecture cannot be overstated,” says long-time colleague Professor Randall Korman. “His dedicated service—first as undergraduate chair under Dean Werner Seligmann, and later as graduate chair under Dean Bruce Abbey—was instrumental in securing the national reputations of both programs. For the past 40 years, his teaching consistently reflected his deeply held belief in the importance of an architectural education that is both professionally rigorous and culturally broad. As one of the few faculty members who maintained an active practice, his buildings are a testament to this credo.”