Next University Lecture: ‘This Changes Everything’ with Author Naomi Klein

Canadian journalist, syndicated columnist and bestselling author Naomi Klein is the next speaker in the 2015-16 University Lectures series. Her presentation, “This Changes Everything: Capitalism vs. the Climate,” is Tuesday, Nov. 3, at 7:30 p.m. in Hendricks Chapel. 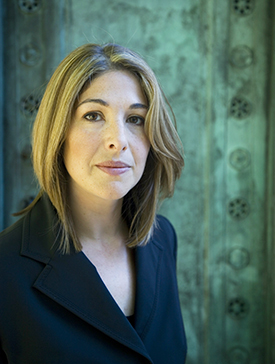 The event is free and open to the public. Her appearance is co-sponsored in cooperation with the LGBT Resource Center and Syracuse Symposium. American Sign Language interpretation and Communication Access Real Time will be available.

Klein is best known for her landmark 2007 book “The Shock Doctrine: The Rise of Disaster Capitalism” as well as her more recent “This Changes Everything: Capitalism vs. the Climate” (Simon & Schuster, 2014), which debuted at No. 5 on The New York Times Best Sellers list and is one of the New York Times’ 100 Notable Books of 2014. It was the 2014 winner of the prestigious Hilary Weston Writers’ Trust Prize for Nonfiction and was shortlisted for the 2015 PEN Literary Awards in the nonfiction category.

“This Changes Everything” is also the title of a documentary based upon the book—and narrated by Klein and directed by her husband, Avi Lewis—that was released in September and has drawn sizable audiences at film festivals and special showings. Klein will be sharing an excerpt during her University Lectures talk.

Her first book, “No Logo: Taking Aim at the Brand Bullies” (Random House of Canada, 1999), was an international bestseller and translated into 25 languages with more than 1 million copies in print. In 2011, Time magazine named it one of the top 100 non-fiction books published since 1923, and the Literary Review of Canada hailed it as one of the hundred most important Canadian books ever published.

Klein’s “The Shock Doctrine” was also an international bestseller, appearing on multiple “best of the year” lists and named as a New York Times Critics’ Pick of the Year. A six-minute companion film, also produced in 2007, was an Official Selection of the Venice Biennale, San Sebastien and Toronto international film festivals. “The Shock Doctrine” was later adapted into a feature-length documentary that premiered at the 2010 Sundance Film Festival; it was an Official Selection of the Venice Biennale and won the Best Documentary Jury Prize at the American Film Institute’s Film Festival in Los Angeles.

Klein is a contributing editor for Harper’s and a reporter for Rolling Stone, and she writes a regular column for the Nation and the Guardian that is syndicated internationally by the New York Times Syndicate. Additionally, her writing has appeared in the New York Times, the Washington Post, Newsweek, the Los Angeles Times and the Globe and Mail, among many other publications.

She is a member of the board of directors for 350.org, a global grassroots movement to solve the climate crisis; a Puffin Foundation Writing Fellow at the Nation Institute; and a former Miliband Fellow at the London School of Economics. She holds an honorary doctor of civil laws from the University of King’s College, Nova Scotia.

In 2004, her reporting from Iraq for Harper’s won the James Aronson Award for Social Justice Journalism. In 2014, she received the International Studies Association’s IPE Outstanding Activist-Scholar award. In 2015, she received the Izzy Award honoring outstanding achievement in independent journalism and media.