The Theta Xi Chapter of Phi Beta Sigma Fraternity Inc. presents its fifth annual fall comedy show, “Laugh Till You Turn Blu,” on Saturday, Nov. 7, at 7:00 p.m. in Goldstein Auditorium (doors open at 6 p.m.). This year will feature comedic actor Mike Epps. All proceeds from the show will be donated to the Good Life Foundation. Tickets are available at the Schine Box Office; $6 for the comedy show and party package. 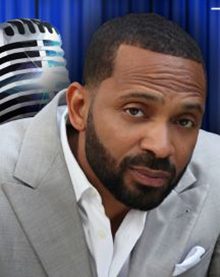 Known for his breakthrough role as the eccentric cousin Day Day in the “Friday” franchise, Epps first appeared on HBO’s “Def Comedy Jam.” He has since appeared in feature comedies such as “All About the Benjamins,” “Lottery Ticket,” “The Fighting Temptations,” the “Resident Evil” franchise, “Dr.Dolittle 2,” “Guess Who?” and others. In 2011, he was awarded an NAACP Image Award for “Best Supporting Actor” for his role in the Sony Pictures film “Jumping the Broom.” Epps has been recognized as a growing dramatic talent especially in the HBO bio-pic “Bessie” based on Bessie Smith played by Queen Latifah. Epps completed his Live Nation national tour “Mike Epps; After Dark” at the end of 2014. Currently audiences can see him on Starz’s “Survivor’s Remorse” as Uncle Julius. In 2016, Epps will be starring as Uncle Buck in ABC’s “Uncle Buck”, a series based on the 1989 film starring John Candy.

The Good Life Foundation’s mission, according to its website, is “to cultivate a movement of entrepreneurial thinking and action among at-risk youth, by combining life coaching, financial literacy and entrepreneurial training to interrupt the cycle of poverty, violence and incarceration and improve academic performance in the lives of the youth that we touch.”

For more information, contact Theta Xi Vice President John Hayden at jahayden@syr.edu. More information about “Laugh Till You Turn Blu,” the Good Life Foundation and the Theta Xi Chapter can be found on Facebook and the chapter’s Instagram and Twitter @pbstheta_xi.