After 40 years of leadership and service to Syracuse University, Larry Martin announced he will retire from his post as vice president of program development at the end of 2015. 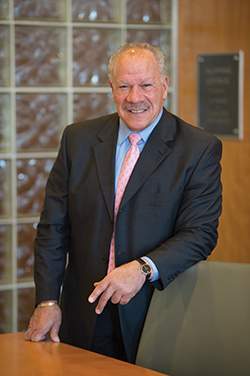 Martin has served at the helm of Syracuse’s Office of Program Development since 1995, engaging the University’s African American and Latino alumni at unprecedented levels.

During his 20-year tenure, the Office of Program Development hosted nine alumni reunion weekends and eight off-campus trips, including a journey to South Africa for 140 alumni in 2007; raised and awarded more than $3.1 million in scholarship aid to talented African American and Latino Students through the Our Time Has Come Scholarship Fund; published a semi-annual magazine, The Syracuse Manuscript; produced art exhibits (in partnership with the Community Folk Art Center) featuring some of America’s pre-eminent artists, including Romare Bearden, Jacob Lawrence, Pérez Celis and Gordon Parks; and led efforts to retire the jersey of one of Syracuse University’s greatest sport stars, pioneering airman Wilmeth Sidat-Singh ‘39.

“Larry Martin has been a fixture at Syracuse for more than four decades and made enormous contributions to University life,” says Chancellor Kent Syverud. “He has worked hard to engage and connect alumni, especially African American and Latino alumni, with one another and with the University. In fact, I can’t think of anyone who has done more to build meaningful relationships between them and our students and faculty. Larry is a steward of the University, and I know his impact will be felt across campus and among alumni for years to come.”

In addition, Martin was instrumental in organizing efforts to recognize the Syracuse 8—nine members of the Syracuse University football team who boycotted the team in 1970 to protest inequities within the athletic program. In 2006, the former players were awarded the Chancellor’s Medal for Outstanding Achievement and cited for their extraordinary courage. Last year, their story gained a wider audience through the book “Leveling the Playing Field: The Story of the Syracuse 8,” published by Syracuse University Press.

“For years, we thought that our sacrifice had been forgotten and Larry revived it in the eyes of the University,” says Greg Allen ’72, a member of the Syracuse 8 and a retired insurance executive. “His efforts brought us back into the Syracuse University family and washed away years of bitterness.”

“Larry has not only been a University administrator, but probably one of the most prolific fundraisers, counselors and community organizers at the institution,” adds Syracuse Trustee Deryck Palmer ’78, a partner in the New York City law firm Pillsbury Winthrop Shaw Pittman LLC. “He has been highly effective in achieving successes that are in the best interest of a diverse community while building relationships across the country and serving as a role model and inspiration to students on campus.”

Martin joined Syracuse University as director of development in 1977 and was part of the task force that built the Carrier Dome, the first facility of its kind on a college campus. Following the successful campaign to complete the Dome on time and within budget, he subsequently became part of the $35-million Capital Campaign team and represented the university in the Midwest, cultivating and soliciting alumni for major gifts to the University.

“Larry has lived and breathed Syracuse University for much of his professional life, and to say he will be missed would be a tremendous understatement,” says Matt Ter Molen, chief advancement officer and senior vice president. “His passion for the University, his commitment to making it a better place to work and study, and his endless quest to engage our alumni have been nothing short of extraordinary.”

In 1983, Martin was part of the group that planned and managed the inaugural $1 million School of Education Scholarship Fund, which later became the Burton Blatt Scholarship Fund. In 1986, he spearheaded Syracuse University’s efforts to establish a presence on the West Coast. Along with trustees Joe Lampe ’53, G’55, Marshall Gelfand ’50, Jim Miller ’63 and in collaboration with the S.I. Newhouse School of Public Communications, he created the “Hollywood Program.” This program gave Newhouse students a behind-the-scenes look at the entertainment industry in Los Angeles, providing them with the unique opportunity to meet with prominent writers, producers, agents and entertainment executives such as Dick Clark ’51, Peter Guber ’64, Rob Light ’78, Ron Meyer, PhD ’10, Mark Tinker ’73 and others. The innovative program later became the “Semester in LA.”

“Through the years, Larry has interfaced with some of the University’s most influential alumni and engendered their loyalty to the University,” says Syracuse football legend Floyd Little ’67. “I know of no better ambassador for Syracuse University than Larry Martin.”

“It’s been a great journey that has exceeded all of my professional and personal expectations,” says Martin. “Along the way I have met many talented alumni and friends who have helped propel Syracuse University forward in many ways.”