Dean James B. Steinberg has announced the creation of a new faculty award, the Maxwell School Tenth Decade Faculty Scholar, to recognize and encourage excellence in citizenship teaching, research and public engagement at the Maxwell School. 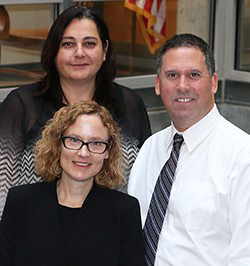 The Tenth Decade Faculty Scholar award program has been created as part of the larger Tenth Decade Project—a collection of programs, projects and other initiatives developed to foster innovation and collaboration in the years leading up to the school’s 2024 centennial. The Tenth Decade Project emphasizes Maxwell’s legacy of interdisciplinary citizenship education and scholarship, and a commitment to sustain that tradition of excellence into Maxwell’s second century.

“The Tenth Decade Project is already funding innovative interdisciplinary faculty proposals that focus on Maxwell’s historic focus on citizenship,” says Steinberg. “These new grants, provided by members of the Maxwell School’s Advisory Board, honor and support what has always been Maxwell’s greatest strength—our unparalleled faculty. Carol, Andrew and Tina are excellent examples of this great tradition.”

Tenth Decade Faculty Scholars were selected based on their exemplary record of research and teaching. Grants provided through the Tenth Decade Faculty Scholars initiative will be used to benefit the faculty members’ research and curricular development. Current funding has allowed for three awards, but  it is anticipated that additional philanthropic support in the months and years ahead could provide new awards that will recognize additional Maxwell faculty.

Each of the inaugural appointees expressed appreciation for the Maxwell School’s citizenship traditions and their opportunity, now enhanced, to contribute to the school’s future.

“Maxwell’s focus on citizenship has only increased in national and global importance in the 21st century,” says Faulkner, “and I’m honored to be able to engage these profound questions with our talented faculty and students. I am eager to see how these conversations evolve over the next 10 years.”

Faulkner’s research focuses on the history of American social movements, particularly women’s social and political activism in the 19th century. Her books include “Women’s Radical Reconstruction: The Freedmen’s Aid Movement” (University of Pennsylvania Press, 2004), “Lucretia Mott’s Heresy: Abolition and Women’s Rights in Nineteenth-Century America” (University of Pennsylvania Press, 2011), and “Women in America to 1880: A Documentary Reader” (Wiley-Blackwell, 2011). A professor of history, she is currently serving as the interim chair of the undergraduate Maxwell Program in Citizenship and Civic Engagement and teaching its core seminar on “Justice, Ethics and Citizenship.” Faulkner holds a Ph.D. from Binghamton University.

London is a professor of sociology whose research focuses on the health, care and well-being of the stigmatized and vulnerable, including persons living with HIV/AIDS; caregivers; welfare-reliant and working poor women and their children; lesbian, gay, bisexual and transgender persons; persons with disabilities; the formerly incarcerated; older adults; and veterans. He is a former chair and the current graduate director of Maxwell’s Department of Sociology. In 2015, he received the University’s Excellence in Graduate Education Faculty Recognition Award. He was a National Institute of Mental Health Postdoctoral Fellow (while at UCLA) and holds a Ph.D. from the University of Pennsylvania.

“I am honored, humbled, and grateful to be appointed as a Tenth Decade Scholar,” says London. “While receiving this award has given me pause to reflect on past accomplishments, collaborations and the support I have received from many individuals and institutions, it has also energized my thinking about the future and what I can do to help enrich Maxwell’s tenth decade.”

“Like many,” says Nabatchi, “I am enamored with the impressive history of the Maxwell School, but I am even more excited about our future. I am thrilled to have the opportunity to contribute to our future as one of the inaugural Maxwell Tenth Decade Scholars.”