The University has received a $900,000 grant from Blackstone Charitable Foundation for the launch of a new campus entrepreneurship program.

The program, Blackstone Launchpad, was announced today by Blackstone Charitable Foundation as part of the largest expansion of its campus program. Syracuse is one of five New York universities—Cornell University, New York University, University at Albany and University at Buffalo—to take part in the three-year $4.5 million grant that will establish partnerships among the five universities and introduce entrepreneurship as a viable career option for all students. The initiative will provide more than 180,000 students, regardless of major, with a network of venture coaches and an entrepreneurial support system.

“Syracuse University has a proud entrepreneurial spirit.  It is a pillar of our present and of our future endeavors,” says Chancellor Kent Syverud. “The Blackstone Launchpad program will allow us to align all our entrepreneurial efforts within our schools and colleges. Additionally, the grant will help us further develop innovative opportunities for our students, and help us enhance the entrepreneurial efforts in Central New York.” 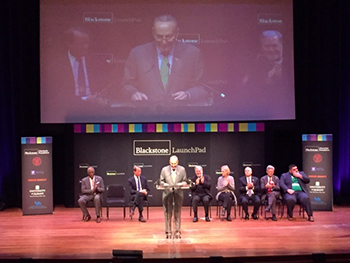 The announcement about this new initiative was made Friday, Oct. 23, at New York University’s Skirball Center for the Performing Arts and was attended by Sen. Chuck Schumer (D-NY) and Blackstone President and Chief Operating Officer Tony James, who delivered remarks. Presidents and chancellors from each of the five campuses delivered video messages, as did other local New York politicians.

“The entrepreneurial spirit permeates the entire Syracuse University campus and the Blackstone Launchpad will allow greater networking and collaboration among students. The program will allow for the richest of exchanges of innovative ideas across our full student population and bring entrepreneurship into the greater community,” says Liddy.

The impetus to bring Blackstone Launchpad to the University was spearheaded by a multidisciplinary team including both Liddy and Fathers as well as representatives from across campus.

Later this year, the University will open a new space in Bird Library forthe Blackstone Launchpad program in order to help align entrepreneurial efforts of students, while connecting them with mentors and collaborators.

Blackstone Launchpad has become global in nature and has a presence at 21 campuses throughout the U.S. and the United Kingdom. All the campuses are linked and allow students to draw ideas and best practices from participating colleges and universities. Student entrepreneurs in New York will have access to an international community of more than 500,000 peers and expert advisers. Funding for this program is made possible through the Blackstone Charitable Foundation’s Entrepreneurship Initiative, which seeks to support the development of ecosystems for aspiring entrepreneurs creating the high-growth ventures that are known to spark economic growth.

Blackstone Charitable Foundation was recognized by President Obama’s “Startup America” Initiative and pledged to expand the program to five new regions over five years. That pledge was fulfilled by the program’s earlier expansion to California.

Syracuse University has maintained its business accreditation by AACSB International—The Association to Advance Collegiate Schools of Business. Today, 870 business schools in over 100 countries—maintain this distinguished hallmark of excellence in management education. Founded in 1916, AACSB International is the longest-serving…

In an effort to hear more about Central New York’s economy and impact of the pandemic, President and CEO of the New York Federal Reserve Bank John C. Williams will be paying a virtual visit to Syracuse on Wednesday, March…

Syracuse University Libraries’ Blackstone LaunchPad & Techstars is accepting applications on a rolling basis from undergraduate and graduate students who need help moving an idea from concept to commercialization. Grants of up to $2,500 may be awarded to individual students…

A new paper by Syracuse University Professor Joseph Warburton offers compelling new evidence of the risk of business development companies (BDCs). Warburton, who holds dual appointments as professor of law in the College of Law and professor of finance in…