Charles Preuss had spent the previous seven years of his life with his head on a swivel. As an airborne paratrooper for the U.S. Army, his life depended on an astute understanding of his surroundings and the people in them. Upon returning to civilian life, it seemed that every person he encountered was the opposite—absorbed by their smartphone’s tiny, glowing screen and oblivious of what was happening around them. 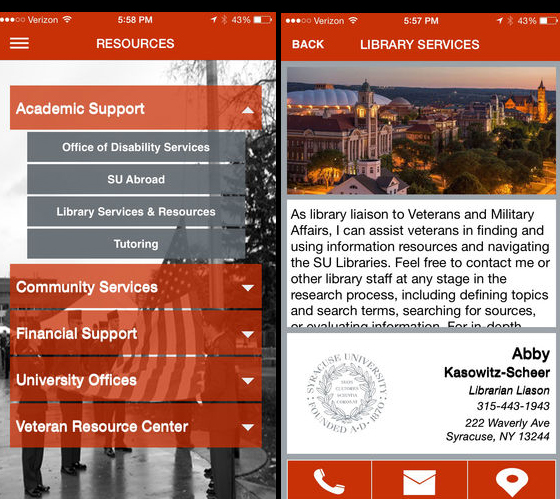 “I felt like I was around robots,” says Preuss. “Being overseas for so long, I didn’t use my phone. Everyone here seemed to be walking around with their heads down, totally engrossed in their device. That was very foreign to me at first.”

In addition to transitioning from a military life to a civilian life, Preuss was grappling with the transition from soldier life to student life as he enrolled in the iSchool’s information studies program.

“Student veterans are a very different demographic. We’re in our mid-to-late 20s or older. Some are raising families or working full-time jobs. We’re coming out of a very structured military culture into one that’s not so structured. We’re also a minority in the student population, so it’s important that we’re able to find each other.” says Preuss.

Recognizing society’s infatuation with mobile devices and his own desire to connect student veterans with people they can relate to, and utilizing support from the University’s Institute for Veterans and Military Families (IVMF) and the Office of Veteran and Military Affairs (OVMA), Preuss proposed a mobile application exclusively for the benefit of veterans at SU. The idea excited Ron Novack, OVMA’s executive director, so much that they set out to put boots on the ground to start the project immediately.

Working with Steve Masiclat, the director of new media management in the S.I. Newhouse School of Public Communications and a Marine Corps veteran, they were quickly able to identify a team of computer engineering graduate students in the College of Engineering and Computer Science that was not only capable of building the app for iOS and Android platforms, but prepared to share the vision of supporting veterans. Tushar Bhatia, Ankur Pandey, Gaurav Bhasin and Abhilash Krishnamurthy took on the task, developing an app in just two months.

In his role as product manager for the app, Preuss found himself applying leadership skills he learned in the military. “To overcome any obstacle, you have to know your men, their strengths and weaknesses, and how to build the team so our strengths levy each weakness and form a great unit. It doesn’t matter if it’s in the military or in business, you still have a team,” he says. “Ankur likes to break it down to the bare bits and bytes and wanted to know the entire architecture of how the app is being built. Tushar knows all the different computer languages and thinks holistically. Gaurav likes to go against the status quo and ask why. Abhilash wanted to find efficiencies and keep the project on track. The product rose to another level of quality because of their devotion to this project.” 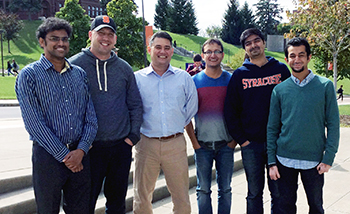 The entire cross-collaborative team envisioned what shape the application should take and arrived at a robust, yet straightforward, set of features. Using the app, veterans are provided guidance through their entire higher education experience, using a newsfeed of veteran news and events, and a step-by-step “roadmap” through the application process. It also includes a directory that connects users, listing their military branch and contact information.

“I worked for Oracle before I came to Syracuse University, so I have experience with developing products like this, but I’ve never experienced this degree of satisfaction with a project before,” describes Krishnamurthy. “I’m hopeful that this app will help create a smooth transition from military to academic civilian life. We put a lot of thought into providing veterans with everything they need to succeed at SU and gathered their feedback along the way.”

The application is available for download in the App Store and Google Play. With most of the work behind them, the team remains hesitant to celebrate their success. “I can’t wait to talk about it when my fellow veterans have found value in it. That’s the moment we’re all waiting for. When veterans come up to us and say, ‘This app has helped me,’ that will be our measure of success,” says Preuss.

James Lyons ’03, one of the first Syracuse University alumni killed during Operation Iraqi Freedom, was inducted into the University’s National Veterans Resource Center’s Hall of Honor on Oct. 15. He was also recognized as the “Hometown Hero” during halftime…

The National Veterans Resource Center (NVRC) will host its first-ever military-themed Living Library on Nov. 15 from noon-5 p.m. Military-connected volunteers from across the campus and community will act as “living books,” representing a range of cultural backgrounds, talents and…

Making a Difference on the Battlefield, in the Corporate World and at Syracuse University

The incoming chair of the Office of Veteran and Military Affairs (OVMA) Advisory Board, Richard M. (Rich) Jones ’92, G’95, L’95, believes that President Abraham Lincoln’s second inaugural address provides us with a call to action. He says that the…

The Office of Veteran and Military Affairs (OVMA) Student Veteran Undergraduate Internship Award is open for applications from Oct. 1 to May 31. This award provides up to $5,000 in financial assistance to undergraduate student veterans who are attending Syracuse…

Robert Gang, who at 103 is the oldest living alumnus from Syracuse University’s College of Law, was honored Sept. 25 at the National Veterans Resource Center. The WWII and the Korean War-era veteran attended Syracuse University as both an undergraduate…