Justin Mattingly is busy with dual majors in newspaper and online journalism (Newhouse) and political science (Maxwell) and minors in sport management (Falk College), history (Maxwell) and, soon, sport analytics (Falk). But that’s only part of the story. He also puts in a full time job’s worth of hours each week as news editor of The Daily Orange. He also works as assistant to the president for the Perfect Game Collegiate Baseball League.

What was your path to becoming news editor of the Daily Orange? 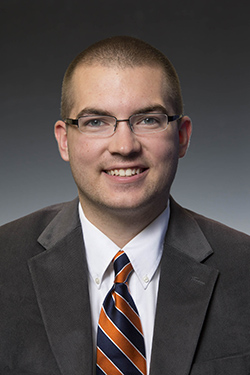 I’m from Philadelphia, New York and I can remember coming to Syracuse basketball games and being in awe of Newhouse and I was fascinated by the work of The Daily Orange. So when I came to SU, I knew it was something I wanted to really pursue. I became a staff writer the spring semester of my freshman year and was an assistant news editor for all of last year. Last year was fascinating given the issues surrounding campus, including THE General Body and the NCAA violations, which I was privileged enough to report on.

Now that I am news editor, I oversee the entire news section, which consists of an in-house staff of five (three assistants and two copy editors) and an out-of-house staff (staff writers, contributing writers) of about 30. I am in charge of all news content, am a member of the editorial board and collaborate with other head editors, among other duties. I also write a decent amount of stories, but not as much as last year. As far as time, I tell my staff that news never stops so really it’s a 24/7 hour job. But in terms of production for the paper, I’m there from 3:30 p.m. to about 1 a.m. Sunday-Wednesday, which totals 38 hours. We have head editor meetings on Fridays and have other meetings as necessary. In total, I would say it’s about a 50-hours-per-week gig.

What other activities are you involved in on campus?

I’m the multimedia director of the Baseball Statistics and Sabermetrics Club, where I took part in a case competition and had research presented this past March at the Society of American Baseball Research Analytics Conference in Phoenix, Arizona.

I’m also a peer adviser for the Newhouse school, the work study student in the Department of Sport Management and do research with Rodney Paul in the sport management department. In a collaboration between myself, Dr. Paul and one other student, our research on the effect of pace of play on attendance demand was selected to be presented at the aforementioned analytics conference.

Is sports something you want to be involved in professionally?

When I first came to SU, I thought I wanted to be the next great baseball writer, but came to realize that I have a passion for news and newswriting. My dream job is to cover the Department of Defense because I’ve always had a stark interest in the defense department, given that I grew up 10 minutes away from Fort Drum.

That doesn’t mean I’m ruling baseball/sports out of the equation. I still love to write about sports, but more so from a statistical analysis point of view. Websites like FiveThirtyEight and FanGraphs have a terrific balance of statistical research and journalism, so writing for a publication like that would be a dream come true.

What are your predictions for this year’s World Series?