A new study abroad course, titled “Global Perspectives, Local Contexts: Women and Gender in the Arab World,” was launched this past summer in the College of Arts and Sciences. Taught by Carol Fadda-Conrey and Dana Olwan, professors of English and women’s & gender studies (WGS), respectively, the course took place in Lebanon and Jordan, where students directly engaged with issues pertaining to the study of feminism, gender and sexuality in the Arab world. 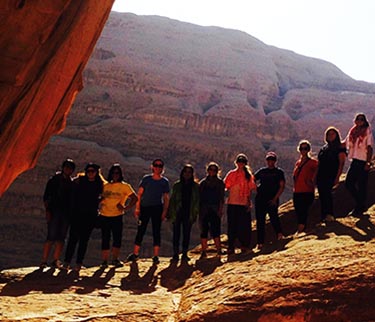 Students at the Wadi Rum in Jordan

In Beirut and Amman, to which Fadda-Conrey and Olwan are tied personally and professionally, students met with teachers, scholars, lawyers, human rights activists and students from other institutions to discuss and learn about the main debates around gender, citizenship, civil rights and sexual health that are particular to Lebanon and Jordan, as well as the Arab world more generally.

“I have taught a version of this course on the SU campus, but team-teaching it as a study abroad course and traveling with students to these different sites turned it into a whole different experience” says Fadda-Conrey, who teaches a variety of courses on Arab and Arab American studies, as well as critical race and ethnic studies. “It was a delight to see students grapple with complex topics from within the Arab spaces they were reading about. They got to see, first hand, the complexities of Arab societies that are more often than not overwhelmingly portrayed through an Islamophobic and Orientalist Western lens.”

Steeped in the humanities and social sciences, the course is cross-listed in two academic departments (English and WGS) and in two interdisciplinary programs (Middle Eastern and LGBT studies), all based in the College of Arts and Sciences, but with ties to other units, including the Maxwell School of Citizenship and Public Affairs.   As part of the course, students familiarized themselves with related feminist, literary, cultural and sociopolitical texts.

“We support our students in developing the tools they need to address widespread assumptions and stereotypes about the Arab world,” says Olwan, whose work focuses on transnational feminism as well as sexual and gendered violence. “It’s important to frame debates about gender politics in the Middle East, as elsewhere, within proper social, cultural and historical contexts.”

The course kicked off with a weeklong stay in Beirut, where students were hosted by the Institute for Women’s Studies in the Arab World (IWSAW) at LAU. In addition to attending an IWSAW conference on women as “agents of change,” students visited the Marsa Sexual Health Center, KAFA (an organization aimed at eliminating all forms of exploitation and violence against women) and the Arab Resource Center for Popular Arts. They also attended lectures by Samira Aghacy, professor of English and comparative literature and director of IWSAW; Mona Harb, associate professor of urban studies and planning at the American University of Beirut; and Dahna Abu Rahmeh, a renowned media artist and activist.

The following week, students traveled to Amman, where they were hosted by the UJ’s Center for Women’s Studies. While in the ancient capital, they visited the contemporary art museum Darat al-Funun, the Jordanian National Commission for Women and Tammey for Youth Development. Their guest speakers included Abeer Dababneh, associate professor of law and women’s studies, as well as director of the UJ’s Center for Women’s Studies, who discussed gender rights and Jordanian law.

The rigorous academic schedule in each city was rounded out by visits to a number of natural and historical sites, including the picturesque Cedars of Lebanon, outside of Beirut; the ancient Jordanian city of Petra; Mount Nebo in Jordan, where Moses was granted a view of the Promised Land; the Jordanian city of Madaba, known for its large Byzantine mosaics; Wadi Rum; and the Dead Sea.  These visits helped students connect what they learned in the classroom with the world outside of it. 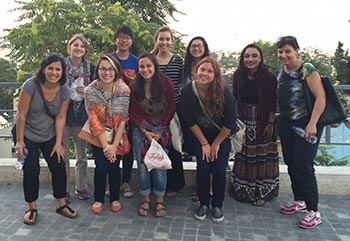 “It was an incredible collaborative pedagogical experience for us both,” confirms Fadda-Conrey and Olwan. “We truly enjoyed working with the students, with one another and having the opportunity to direct our first SU Abroad experience.”

Farrell Greenwald Brenner ’17, a Coronat Scholar majoring in WGS and citizenship & civic engagement (CCE), says the course triggered hard but important questions about community, violence and survival. “I am so tired of hearing about violent [Arab] men and oppressed, veiled [Arab] women,” states Brenner, adding that veiling has as much to do with religion and culture as it does politics. “These stereotypes usually occur in the context of war and conflict, so there’s a political investment in negative, racist tropes of Arab people.”

Daryl Bunyan ’17 echoes these sentiments, saying the reason she enrolled in the course was to better understand the cause of such profiling. She blames the U.S. mass media for propagating many such misconceptions, particularly in the wake of 9/11.  “Most Westerners think that the Middle East and the Arab World are the same thing, but they’re not,” she says, explaining that the Middle East is a rather fluid geographical concept, whereas the Arab World consists of 22 members of the Arab League. “Veiling is also something that many Westerners can’t grasp. After 9/11, when the United States acknowledged the Taliban as this force that makes Muslim women wear burqas [a loose garment covering the entire body, with a veiled opening for the eyes], many Americans saw the veil as a form of oppression.”

Students are quick to praise Fadda-Conrey and Olwan for incorporating rigorous and relevant instruction into their study abroad experience.  “During my stay, I met some of the most hospitable people in my life, who offered me different perspectives on so many things,” says Adriana Curto ’16, a dual major in international relations and CCE. “Just because people deal with day-to-day grievances or security concerns because of their political climate, doesn’t mean we should fear them. I’m sure any open-minded person who spends time getting to know someone from [the Arab world] would walk away with a different perspective.”

Adds Bunyan: “Traveling overseas was an experience in itself. But having Carol and Dana as professors took it to the next level. They encouraged me to push further into certain topics and to question everything. If I could, I’d do this class again in a heartbeat.”

Fadda-Conrey and Olwan believe that such experiences and encounters are essential for solidifying transnational pedagogies and practices that emphasize ethical, nonhierarchical and relational ways of learning about ourselves and those constituted as our others.