Syracuse University’s fiscal health, student life, academic affairs and Fast Forward Syracuse were among the topics of Chancellor Kent Syverud’s address to the University Senate last week. The 25-minute presentation was his first to the University’s academic governing body since the start of the fall semester. 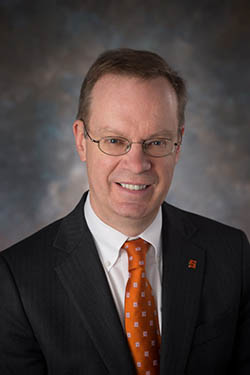 Perhaps the most welcome news during the Chancellor’s address involved his comments on the University’s fiscal health, which continues to improve, largely due to what he called “fiscal discipline” and “smart execution” of the Voluntary Separation Incentive Program (VSIP).

“Fiscal Year 15, which ended June 30, involved disciplined attention to our finances in every unit, academic and auxiliary. Tough choices were made, resulting in not only the balancing of our $1.2 billion budget, but the addition of more than $4 million to our reserves,” he said.

In addition to fiscal discipline, the VSIP program was deemed a success by Chancellor Syverud and his leadership team. VSIP, which was implemented last summer as an alternative to proposed layoffs, was part of the Operational Excellence initiative and allowed the University to identify areas of improvement and efficiency, aligning Syracuse with its peer institutions.

“The plan was successful in the number of participants and the resulting vacancies, allowing the deans and other unit leaders to have the flexibility in making decisions about appropriate staffing levels,” he added. “As a result, extensive workforce planning decisions have taken place over the past month, without resulting in involuntary staff terminations. I feel strongly that, with the success of this program and careful stewardship of the reorganization of our work force, we do not anticipate institutional involuntary terminations this year.”

The Chancellor added that academic and auxiliary units have begun the process of implementing staffing changes and filling those positions identified by unit leaders as priorities.

“We recognize that it is not easy to make changes in the way that we operate by reducing staff. I greatly appreciate the challenging decisions made by all the university’s leaders. I also appreciate the continued positive attitude of the faculty and staff as we implement the individual reorganizations,” he said.

“The mission of the new Chancellor’s Workgroup on Diversity and Inclusion will be to develop solutions on how to further create a more diverse and inclusive environment at the University,” he said. “The workgroup will create an institutional diversity strategy, and align it with the vision and mission in the new Academic Strategic Plan.”

On a related note, the Chancellor updated the Senate on several executive-level searches, most of which are underway. They include searches to fill the positions of vice chancellor and provost; executive chief information officer; dean of Hendricks Chapel; senior vice president for student affairs; vice president for research and dean of the Graduate School; and deans of the Maxwell School of Citizenship and Public Affairs, the College of Visual and Performing Arts and the College of Law.

Acknowledging the high volume of activity on campus, Chancellor Syverud praised committees and workgroups for their progress on the Academic Strategic Plan, which has moved into the implementation phase. According to the Chancellor, the teams are focusing on six areas—student experience, discovery, internationalization, commitment to veterans, innovation and “One University”—and are “deepening their understanding of the goals for their particular theme.”

“The teams will work together, seeking more input as needed, to decide how these goals can be reached, prioritize actions, set timelines, decide on metrics of success and determine resources needed to achieve the goals,” he added.

Made up of students, faculty and staff, the Oversight Committee will coordinate the efforts of all six teams, as well as those of the individual schools and colleges, each of which is charged with developing its own strategic plan.

“The Framework is meant to guide future campus development and to be flexible,” he said. “Decisions to pursue specific projects will be based on accommodating University priorities, and will require discussion with and approval by the Board of Trustees. That process will commence with the November Board meetings, and more information will be shared with the campus later this semester.”

A topic of particular interest to the Senate was the University’s new travel policy. In response to a faculty petition handed to him before his address, the Chancellor recognized the concerns about the new travel policy, saying that the University must identify and implement a sound solution to control travel costs.

“In response to [faculty] feedback, I have asked Doug Freeman, director of purchasing and real estate and head of the Fast Forward Travel Initiative Team, to reconvene the team members to explore areas where the online system needs to better serve our travelers,” he said. “Doug and his team have already contacted BTI and Concur [travel and expense management companies] with a request to review incoming calls and agent responses, since the program’s inception. I’m asking Doug to add several concerned faculty members to his group to get an idea of the challenges and help us find solutions.”

Chancellor Syverud added that feedback—about this issue—is not only welcome, but encouraged. Faculty or staff with feedback or concerns should contact Freeman at dhfreema@syr.edu.

The Chancellor also announced that Family Weekend 2015, which was held Sept. 25-27, experienced a 17-percent spike in attendance over last year. The event was attended by nearly 4,800 family members from 37 states and dozens of countries, including England, Peru, India, Switzerland, China and Canada. Approximately 80 percent of the attendees were related to first-year students.

Upon the conclusion of the Chancellor’s official business, he shared several brief, but important updates, all of which were well received. They included the following:

To share your thoughts or submit an idea to help improve Syracuse University, email chancellor@syr.edu.