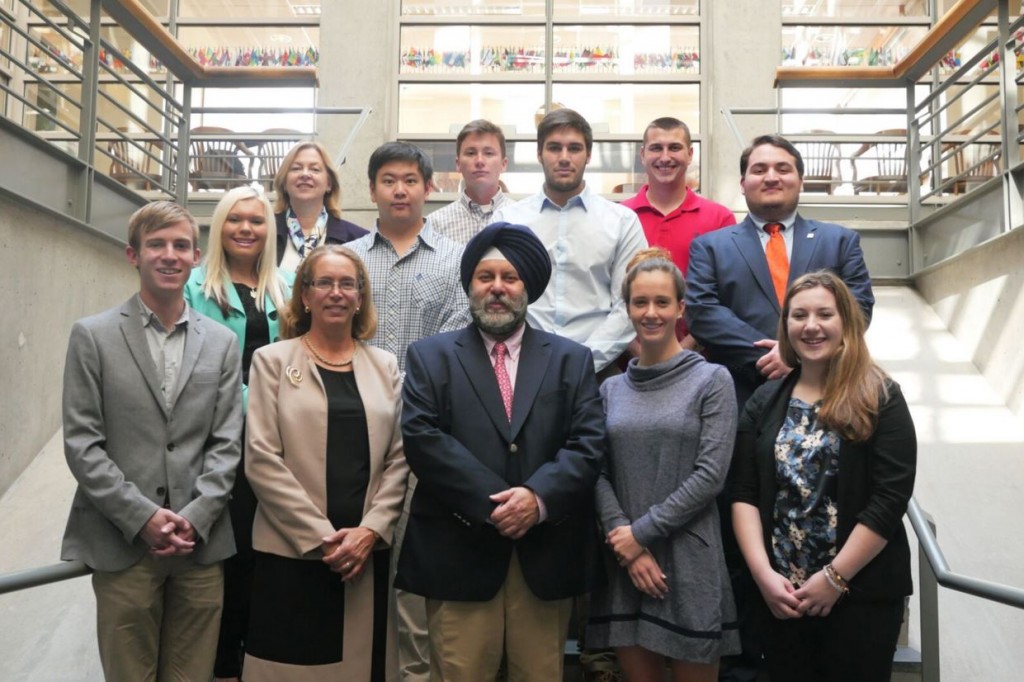 As part of a recent visit to campus, Ambassador Puri, center, met with Model UN student-delegates at the Maxwell School.

A cohort of University students will be representing India at the National Model United Nations (NMUN) conference, which kicks off on Friday, Oct. 30, in Washington, D.C. In preparation for the competition, students had the chance to meet with Manjeev Singh Puri, Indian Ambassador to the European Union.

As part of his recent visit to campus, Puri met with student-delegates to discuss their role in developing position papers relating to the government of India. Puri spoke on the topic of multilateralism, which involves multiple countries working together on a single issue. It speaks to the heart of the work done by Puri, who has served in a leadership role representing India at the table during policy discussions on sustainability, climate change and the global economy. Prior to his appointment as ambassador to the European Union, Puri was India’s ambassador to the United Nations.

His message was also valuable for NMUN student-delegates. In all, nine students majoring in international relations (IR) will represent the Republic of India in a simulation of global diplomacy. They are among 850 college students from around the world taking part in the annual event.

“This is the third Model UN conference I have attended, but the first where I am on the dais, as the head delegate of the team,” says Gabrielle Sferra ’16, who says Model UN has been her greatest passion during her time at Syracuse. “I am honored to embrace this leadership role; it is something I have wanted to do since joining the team in spring 2014. The program creates a culture where people not only care about the world but can come together and work to achieve something to help solve world issues, even if it is only for simulation. It’s a rigorous but meaningful experience.”

“I’m excited to be a part of NMUN this year,” says Assistant Head Delegate Patrick Fallon ’16, “because I know we have a strong team that will be representing the Republic of India. I feel that participation in Model UN during my time at SU has helped me greatly in my study of international relations, as I have learned about the United Nations and other international organizations from a practical approach. In terms of my professional aspirations, this practical understanding of the United Nations has only deepened my interest in a possible career in international affairs.”

According to Francine D’Amico, associate professor in IR and advisor to the Model UN team, the students are currently researching India’s policy positions on the topics before their respective committees to draft position papers to submit to the conference organizers.

“The topics range from international security to development issues and from climate change to gender equality,” says D’Amico. “The position papers are made available to all delegates participating in the committee to enable them to identify negotiating partners with shared interests.”

The NMUM participants from Syracuse University are:

Once at the conference, the delegates caucus, negotiate and draft working papers to be voted on as formal resolutions urging UN member states and the UN system to take action on the issues before the committee.