Legendary singer-songwriter and social justice activist David Crosby, a two-time Rock and Roll Hall of Fame inductee with the iconic bands the Byrds and Crosby, Stills & Nash, will conduct a master class, “A Conversation with David Crosby,” on Friday, Oct. 16, at 4 p.m. in Crouse College’s Rose and Jules R. Setnor Auditorium. Doors open at 3:45 p.m. 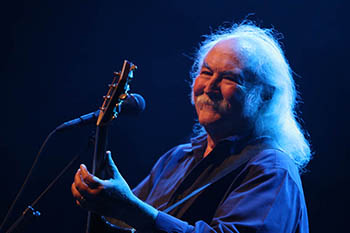 Crosby will talk about his folk music roots, folk/rock history, the Laurel Canyon music scene, his influences and his songwriting process.

The event is open to Syracuse University and SUNY ESF students, faculty and staff. Seating is limited. Tickets are required and are free with a valid SU/SUNY ESF I.D.; limit two per person. Tickets may be obtained on a first-come, first-served basis at 301 Crouse College or 226 Smith Hall Tuesday-Thursday, 9 a.m.-5 p.m., and Friday, 9 a.m.-noon.

“A Conversation with David Crosby” is presented by the Bandier Program, the Orange Music Group and the Rose, Jules R. and Stanford S. Setnor School of Music in the College of Visual and Performing Arts. It will be moderated by Theo Cateforis, associate professor and chair of music history and cultures in the College of Arts and Sciences.

Crosby is a two-time Rock and Roll Hall of Famer, inducted as a member of both the iconic folk-rock band the Byrds—with whom he first rose to stardom—and the iconic Woodstock-era-defining-group Crosby, Stills & Nash.

A native Californian—and son of an Academy Award-winning cinematographer—Crosby originally intended to be an actor when he moved from Santa Barbara to Los Angeles in 1960. Music prevailed, however, and Crosby began his career as a folksinger, playing clubs and coffeehouses nationwide. In LA in 1963, Crosby formed the Byrds with Roger McGuinn, Chris Hillman, Gene Clark and Michael Clarke, winning widespread recognition for his songwriting and charismatic presence. Driven by hits, including “Eight Miles High,” “Turn! Turn! Turn!” and a cover of Dylan’s “Mr. Tambourine Man,” the Byrds’ signature electric folk-rock influenced countless musicians to come.

Crosby left the Byrds in 1967 to embark on a lifelong collaboration with Graham Nash and Stephen Stills. Renowned for vocal harmonies, stellar musicianship and timeless songs, Crosby, Stills & Nash (CSN) have been called “the voice of a generation” and were Grammy-honored in 1969 as Best New Artist. The trio’s self-titled debut album introduced classics, including the Crosby-penned tracks “Guinnevere” and “Wooden Ships”; today, it is included on Rolling Stone’s list of the “500 Greatest Albums of All Time.” Crosby continues to tour and record with CSN, as well as with Crosby, Stills, Nash & Young and as a duo with Graham Nash.

As a solo artist, Crosby debuted with the 1971 masterpiece “If Only I Could Remember My Name,” recently reissued as a two-disc set featuring a 5.1 mix, video footage and other bonuses. Crosby also performs and records with CPR, the jazz-flavored trio he formed in 1995 with his son James Raymond and Jeff Pevar.

Crosby’s most recent release is 2004’s “Crosby-Nash,” a two-disc set with Graham Nash, their first as a duo since 1976’s “Whistling Down the Wire.” Their debut LP together, 1972’s “Crosby & Nash,” featuring “Southbound Train” and “Immigration Man,” is regarded as one of the best side projects from the CSN&Y sphere. Their catalogue also includes 1975’s “Wind On the Water” and the live gem “Another Stoney Evening.” Previously a CD-only release of a 1971 concert recording, the latter title is now available in digital and LP versions as the inaugural releases on Blue Castle Records, the independent label Crosby formed with Nash in 2011. “Voyage,” a three-disc, career-spanning retrospective box set touching on all aspects of Crosby’s oeuvre, was released in 2006. In 2014, Crosby released the studio album “CROZ.”

Crosby is also the author of three books, including “Stand and Be Counted: Making Music, Making History/The Dramatic Story of the Artists and Causes That Changed America,” which underscores his commitment to social activism and belief that artists and musicians are potent agents for change. Crosby’s two autobiographical volumes are “Long Time Gone” and “Since Then: How I Survived Everything and Lived To Tell About It.” The latter, per Entertainment Weekly, chronicles “a fascinating life worthy of a sequel.”