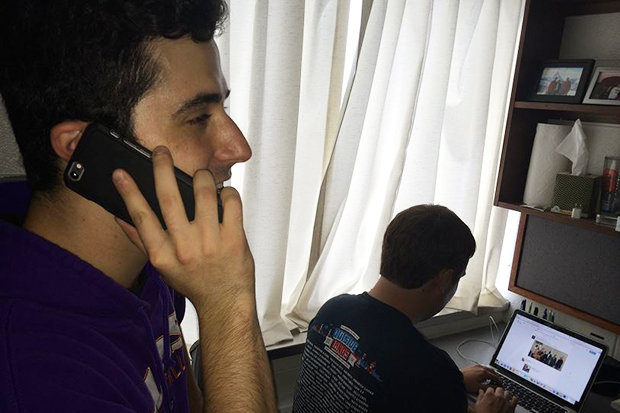 It’s shortly before 11 on a Monday night. Zach Parnes ’18 and Nick Hennion ’18 are where you’ll find them on most Monday nights during the NBA season, in their residence hall room, preparing to “go live.” A mutual love of the NBA Phoenix Suns brought them here. Live podcasting to fellow Suns fans is what they’re about to do.

While Nick fires up his laptop, Zach is on his cell phone, making a connection with a podcast server in order to reach people who might be halfway around campus, the country or the globe. That’s the kind of audience the internet affords: worldwide.

“We use our passion and our motivation to get the job done,” says Parnes.

The job at hand is delivering a weekly podcast that deals with all things Phoenix Suns. The podcast, called “Suns Talk Radio,” started back when Parnes was a 15-year-old growing up in Pittsburgh. “I had served as a reporter for Sports Illustrated for Kids (he even appeared on NBC’s “Today Show” to give his NFL draft picks). When I finished that role, I still needed something to keep the creative juices flowing, so I started a podcast. I had a blast with it, even though it wasn’t pulling in any listeners.” 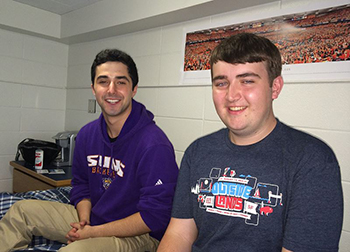 Parnes, left, and Hennion met at an NBA preseason game.

At first it was a one-man-band approach, but eventually Zach got some help. It happened after he enrolled at the University, where he’s a student at Newhouse. One night, while attending an NBA preseason game at the dome, Zach met Nick, a student at the iSchool. Through conversation, they learned each was a fan of the Phoenix Suns (which Zach says for two East Coast residents is pretty unusual). The rest, as they say, is history.

“My first major contribution to ‘Suns Talk Radio,’” says Hennion, “was to land an interview with ESPN business analyst Darren Rovell, who appeared on the podcast. That helped launch our show.”

Since then, Parnes and Hennion have featured various guests, including Sean McDonough ’84. “Once he heard what we were doing,” says Parnes, “he immediately agreed to come on to the show.”

As the broadcast begins, Parnes mans the mic (his phone) while Hennion handles the social media stream. “We’re up to 1,600 followers,” according to Hennion, who also handles marketing the program, posting flyers around campus.

So what’s it like knowing they have an audience hungry for their show out there somewhere, listening to a program that originates from a residence hall room on the SU hill?

“I remember when (during the earlier days) I might have five people listening to the show,” says Parnes. Now the numbers have grown. “To routinely get feedback after every program and to routinely draw viewers-is just really unbelievable.”

For Parnes and Hennion, the true test of their success, along with growing their listenership, is validation by their favorite team that “Suns Talk Radio” is a great informational resource for fans. It’s now recognized by the team as an official media outlet for the team, meaning their podcast is a great source for all things under the sun when it comes to the Suns. “I called the Suns media director pretty much every day for a month and a half,” says Hennion, who says Suns insiders now help arrange guests for the show.

While the hard work and persistence of two young men helped launch the show, they did receive some assistance from the SU community, including Mike Duda, a member of the Sport Management Program Board of Advisors (“Without him we definitely would not be where we are right now,” says Hennion.) and Jon Bloom ’97, a Suns employee who has agreed to help grow the show any way he can.

From here, both students see only growth for “Suns Talk Radio.” Perhaps some upgraded equipment. Most certainly more manpower.

“We’re looking for ‘Cuse students who love the NBA to come and join our team,” says Parnes. “They don’t have to be Sun’s fans, we simply need people who care about something they can make their own.”

Those words perfectly describe Parnes and Hennion. Two dedicated, hard-working students who love talking about the Phoenix Suns, and who are driven to make a podcast succeed.