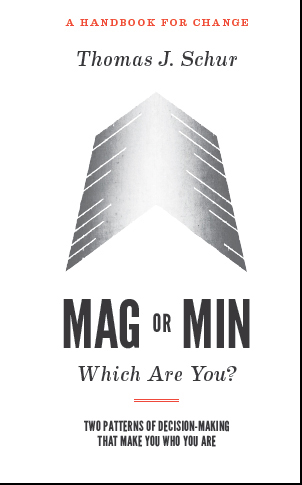 Long-time Falk College instructor Thomas J. Schur, a member of the University faculty for more than 25 years, recently released the book “Mag or Min: Which Are You?,” which explores two patterns of decision making that define who a person is over the course of their life.

Schur provides an in-depth exploration of these two patterns of decision making and guides readers on how a person can change these patterns and thereby change the self. The book’s foundation provides a broad perspective spanning many fields. It enlists the insights of a psychiatrist who developed a major theory of family therapy, an anthropologist focused on identity and existential anxiety and a biologist responsible for a new theory of language. In addition to his use of it in his own life, his framework has been field tested over the years with clients in his private practice, his students and supervisees.

“At the extremes, both reflexes are equally dysfunctional and lead to lives of chronic problems. But people can change. They can control their automatic decision-making process, and make a life-altering change to base decisions on a better assessment of the actual probability of a favorable or an unfavorable outcome, and begin to lead a more productive life. My new book presents the framework, and serves as a handbook for practicing it,” says Schur.