The 2015 Syracuse Symposium™ continues its theme of “Networks” with a keynote address by one of the nation’s foremost media scholars. 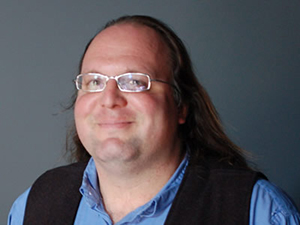 Ethan Zuckerman, a researcher and administrator at the Massachusetts Institute of Technology (MIT), will deliver the symposium’s keynote address, “Insurrectionist Civics and Digital Activism in an Age of Mistrust,” on Thursday, Oct. 15, at 7:30 p.m. in Watson Theatre. The lecture is free and open to the public, and is followed by a Q&A session. For more information, call the Humanities Center at 315-443-7192, or visit http://syracusehumanities.org.

Zuckerman is the author of the bestselling “Digital Cosmopolitans: Why We Think the Internet Connects Us, Why It Doesn’t, and How to Rewire It” (W.W. Norton & Co., 2014). His lecture, as well as the symposium series, is sponsored by the Humanities Center, based in the College of Arts and Sciences.

“We are honored to present Ethan Zuckerman as this year’s keynote,” says Vivian May, director of the Humanities Center and associate professor of women’s & gender studies in A&S. “Professor Zuckerman will discuss how people are finding ways to act as effective citizens during a time he characterizes as an ‘Age of Mistrust,’ one in which activists, spurned by traditional political institutions and strategies, are turning to the Internet to effect change, either in spite of that mistrust or by harnessing it.”

A highly regarded teacher-scholar, blogger and Internet activist, Zuckerman directs the Center for Civic Media at MIT, where he also is a principal research scientist in the MIT Media Lab. Much of his work involves the distribution of attention in mainstream and new media, the use of technology for international development and the use of new media technologies by activists. Notably, Zuckerman has co-founded the Global Voices blogging community, which showcases news and opinions from citizen media in over 150 nations and 30 languages, and Geekcorps, which sends IT volunteers to work on projects in developing nations, including West Africa.

Provocatively, Zuckerman asks: “This patterns presents a challenge for activists and for civic actors: If we no longer have confidence in the institutions of power, who do we seek to influence to make change?” In discussing case studies from the broader social-change field, Zuckerman will explore how civic actors challenge biases in existing institutions and engage in networked approaches to activism.

A graduate of Williams College, Zuckerman helped found Tripod.com, one of the Web’s first personal publishing sites, where he also created the industry’s first pop-up ad. (Zuckerman recently apologized for his invention in a lengthy essay in The Atlantic, calling advertising the “original sin of the Web.”) He is particularly committed to revenue reform, as well as freedom of expression in online spaces.

“Ethan Zuckerman is the real deal—a thinker and activist brilliantly connected to what’s really happening on the Internet on a genuinely global basis,” says Craig Newmark, founder of craigslist and craigconnects.