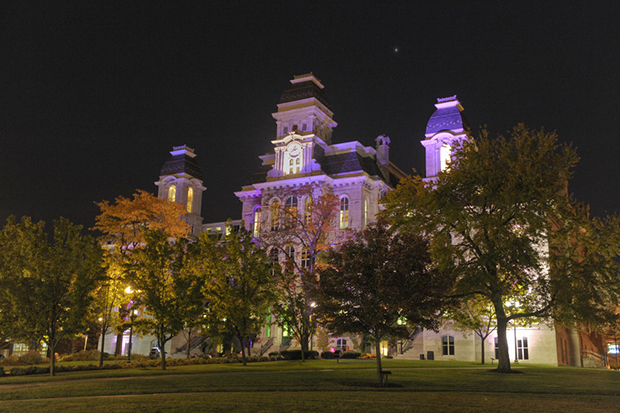 The Hall of Languages is lit up in purple in a previous year to “Shine the Light on Domestic Violence.”

“Syracuse University is proud to support the Shine the Light campaign,” says Rebecca Reed Kantrowitz, senior vice president and dean of Student Affairs and co-chair of the Chancellor’s Task Force on Sexual and Relationship Violence. “Illuminating one of the most historic buildings on campus in purple is another way we can raise awareness about this critical issue. We hope the many people who pass that building each day, will take a moment to think about victims and survivors of domestic violence and join in efforts to combat sexual and relationship violence.”

The Hall of Languages is one of many buildings across the state to go purple. Throughout the years, Niagara Falls, the Empire State Building, the Electric Tower in Buffalo and the Peace Bridge have also donned purple lighting to raise awareness.

Students, staff, faculty and community members can also help to Shine the Light on Domestic Violence by wearing purple on Wednesday, Oct. 21.