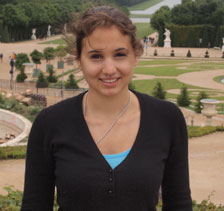 Samantha Usman, a double major in physics and mathematics, received a giant boost to her research efforts this summer when she was named a recipient of the Astronaut Scholarship Foundation’s award. The Pittsburgh native will use the $10,000 prize to continue her research on gravitational waves with the Laser Interferometer Gravitational-Wave Observatory (LIGO) group at Syracuse. Her interest in physics keeps her busy on campus, but she’s also found time to pursue boxing as a member of the University’s boxing team.

How did you get interested in physics and math? How does your minor, French, fit into all this?

I’ve always been interested in math, but when I got to college I learned more about the research going on in the field, like efforts to learn about dark matter, dark energy and, of course, gravitational waves.

As a junior in high school, I did a year abroad to Auvergne, France. I have a minor in French so I can practice my French and language writing skills.

Explain a little about your research area in physics, gravitational waves and the way that LIGO searches for colliding neutron stars and black holes.

The way most people think about gravity is as this invisible force that attracts all things together, like Newton described it 300 years ago. Now, because of Einstein and his theory of relativity, physicists think of gravity as the curvature of space. Imagine a sheet stretched taut and placing a basketball in the center. The sheet will bend around the basketball. Similarly, if you put a planet or a sun (or anything with mass) in space, it will bend space around it.

Now if you push the basketball that’s sitting in the sheet, it will make little ripples in the cloth as it moves. In the same way, if a sun or planet accelerates, it makes ripples in space. These are gravitational waves.

Since gravitational waves are so weak, we can’t make detectable ones in a laboratory. Instead, we look for gravitational waves from really massive objects accelerating very quickly out in space, like colliding neutron stars and black holes. But by the time these gravitational waves reach earth, they’re very, very weak. To measure them, we build giant detectors that have 4 kilometers long arms and use a high-powered infrared laser to measure changes in length smaller than the width of an atom. If we could measure the distance from Earth to the closest star system, Alpha Centauri, at a distance of 4.3 lightyears away, we’d know its distance to within a centimeter. That’s what I call accurate!

Then we look for predicted signals in the data. We know what the gravitational waves should look like, so we search the data for similar signals.

You are also a boxer, a member of the University’s boxing team (along with being captain and treasurer) and ranked second in your division nationally. How did that interest come about?

During my junior year of college, I decided to join a club. I’ve always thought of the importance of being healthy and active and recognized that I work out more if I’m involved in a club. I also wanted to learn something for self-defense, since I’m under 5’3” and a woman. So, I joined the boxing team. I came to nearly every practice during the fall and spring semesters. I eventually trained for championships and fought at collegiate national championships in Ann Arbor, Mich.

What other activities are you involved in here at SU?

I’m a campus tour guide for University 100 and a member of the Society of Physics students. I’m also in the Renée Crown Honors Program and Phi Beta Kappa Honor Society.

What are your plans after you graduate in May?

In October, I will be going to Cardiff University in Wales to continue my research for LIGO and pursue a master’s. After that, I will return to the United States to pursue a Ph.D.