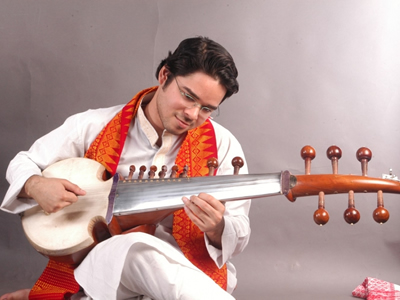 The concert is free and open to the public; however, donations of $5 from students (with I.D.) and $10 from the public are accepted.

Doors open at 6:45 p.m. Free parking is available in the Quad 1 lot, by Crouse College.

The concert is organized by the student chapter of SPIC MACAY, a nationwide movement designed to promote Indian classical music and culture, in conjunction with the Department of Art and Music Histories in the College of Arts and Sciences and the University’s Graduate Student Organization. For more information, contact Abhiram Sishtla at asishtla@syr.edu. 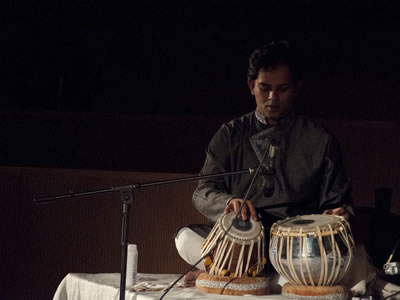 Chakrabarty plays a lute-like stringed instrument called the sarod. He was trained by Kalyan Mukherjea, who, in turn, was a disciple of Radhika Mohan Maitra, the legendary custodian of the Shahjahanpur tradition of sarod music. Chakrabarty, whose instrument is believed to be 110-130 years old, has headlined concerts and festivals around the world, including the Masters of Indian Music festival at the Trafó House of Contemporary Arts in Budapest (Hungary) and the Silk Road Festival in Damascus (Syria). He also is heard on the soundtrack of the Academy Award-winning documentary “Born into Brothels: Calcutta’s Red-Light Kids” (2004).

Hussain is a highly regarded tabla player, involving a membranophone percussion instrument used in Hindustani classical music. He has received numerous accolades, including the prestigious “Son of Lahore” Award from the Pakistani government. Hussain began his career at an early age, studying under his father, singer Mumtaz Hussain, before moving on to tablists Faiyaz Khan, Shaukat Hussain Khan, and Allah Rakha Khan. He has performed in many of the world’s leading venues, including Lincoln Center in New York City; the Smithsonian Institution in Washington, D.C.; and Royal Albert Hall in London.